Right! Here goes with something you don’t know about me even with all the secrets I spilled yesterday. I know what you’re thinking … can there really be something more?

Today I’m coming out about clutter. My closets have never been organized places where clothes hang neatly or where you could open a door and know that something was exactly where you left it. In fact, there have been times when whole rooms began to resemble a big walk in closet and were so bad that even my closest family members were bared from entering.

There are quite a few people who would agree with what I have said here going as far back as my roommate Diane who shared an apartment space with me when we were university students. More recently, my daughter Miranda would not hesitate to confirm that as late as 2007 there was at least one room in our house that looked like more like someone’s storage building out back than it’s intended purpose.

Three guesses which one looked like a ” tip. ” (a British expression I’ve come to love)

It was … my home office space. That’s right, the very place I had always had in mind would be my retreat, a place of peaceful serenity where I could write uninterrupted by everyday life. I dreamed of a space like the one I have now while I was working for corporate America. I was fortunate over the years to have three homes where there was enough room for me to have a space designated as my office.

It is no surprise that my writing life was given the least amount of attention and my ” offices ” always reflected that lack of priority and focus. While the rest of the house might have been fairly tidy, my office was always unfinished, over-cluttered, and completely unwelcoming for any creative energy. It was plainly as I said before, a tip. More than a time or two I found myself channeling Bette Davis as I tried to pick my way through the junk pausing in frustration to utter her famous movie line, ” What a dump! “

The day I saw my  home in Atlanta for the first time, I walked upstairs into a delightful space that felt more like a sweetly decorated little treehouse than an upstairs room in a downtown bungalow. The windows were open and outside a light rain was falling creating a happy sound through the trees that formed a canopy of leaves all around the house.

I was enchanted from the moment I stepped inside and the owners who were selling it themselves, were near enough so that the husband volunteered that the room I had fallen in love with was his wife’s office space, and that she was a writer. Of course I was interested in hearing more and asked what she had written, never guessing the connection we already had.

When he picked up a copy of her book from the shelf, The Truth Shall Set You Free, I was stunned as I had read it only a few months earlier. While working a medical conference at St. Simons Island off the coast of Georgia, I walked into a used bookstore and found her book signed with a personal inscription and I snapped up the first edition which had been published only three years earlier.

Sally Lowe Whitehead had accomplished a great deal in her office space, writing a book that had a tight hold on me from the beginning and I saw our book connection as a sign that I might also find a way to put the ideas I had on scraps of paper into a book or two of my own.

Standing there recalling the contents, I shared with Sally how I had read her memoir and knew her story, which must have been a bit disconcerting. I remembered enough of the inscription for her to glean that she had known the person who owned it. It turns out that this man had died of an AIDS related illness and that knowledge pretty much sealed it for me. Working as I was in HIV, I thought the universe could not be any more clear. This was surely the place I would write all the books I had dreamed of writing.

When I closed on the house, I took my copy of her book with me to the attorney’s office and Sally signed it with the words below.

I am so pleased our paths have crossed.

It is waiting for you with open arms.

I was excited to move in and set up my office in what had been the space where she had completed her book. Here is what my office looked like in late 2007. You be the judge … tip or not? 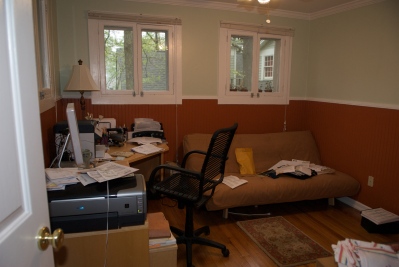 You’re probably thinking … messy, but not really a tip, but what you don’t know is in order to have it look as it does in the three photos above, I had to spill over into another room down the hall.

Again, not awful from this angle, but what you can’t see is all the junk on the other side of the room. All I can say now is, never again!

I’ve shown you my new space and now I want to show you one more thing … the closet! Let me expose what I keep hidden behind closed doors. Once again, John did all the work and built the interiors according to my specifications.

I wanted my closet (wardrobe) space to be divided into three distinct areas. Not only do I write in this room, but I use it as my dressing room too. There are four mirrored doors the length of the wall to bring in as much light as my sliding glass doors will allow.

The first thing I wanted was to be able to hide my chest of drawers so I asked John to build a section that would accommodate the piece of furniture I had already purchased. I keep shoes I rarely wear in little travel bags underneath. Because our small refrigerator has a wooden cabinet front there was no place to put my magnetic collectables so I bought a metal board from Ikea to put some of my favorite quotes and things that I used to stick on the frig in Atlanta. You can see it just above the chest at the back of the closet.

At the far right you can see my hanging clothes with a shoe rack at the bottom and laundry basket under the longer clothing. Notice the pillow color on the daybed.

Now for the business side of life. The left side of the closet holds things related to cameras and computers and business related papers. I have my sewing machine and sewing box tucked in there too. The chest is also from Ikea and has dividers inside that keep all the bits separate and organized. When I put it together, I left the bottom panel out of the second to the last drawer and John fixed it so the last two drawers slide out as one deep drawer that is perfect place for files. Notice the pillows now on the daybed … I did as some of you suggested and made two with orange backing and two with green.

So here ends our week-long tour … please feel free to sign the comment book on your way out and thanks so much for your kind attention.