Unless you have made these yummy treats you have no idea how delish they can really are. What you see here is the result of turning Pioneer Woman’s Chocolate Sheet Cake recipe into mini cupcakes which were perfect for the party we went to last night and the July 4th celebration we’re going to on Sunday with some of our expat community. It was the first time I’ve made them in mini-cupcake form and the success was clear by the clean serving trays we came home with after watching my cupcakes disappear into the mouths of a mostly (except for me) group of Brits.

Several people asked as they complimented my bite-size cakes if they were an American speciality to which I gave credit where it’s due and said, ” Yes, but not a family recipe of mine. ” I told them it belonged to this wild woman out West who went by the name of Pioneer Woman.

Okay … so maybe I embellished a little with the wild woman comment, but as most Brits seem to think they’ve mastered an American accent if they sound like John Wayne when imitating us, (likely having learned their technique as my John did from old western black & white films) I thought wild woman out west would fit the image many seem to have of us as a tough talking, gun-toting, straight shooting, slightly unruly lot.

Passing by the dessert table or puddings, as all desserts are sometimes referred to here was a teenage girl who overheard me give credit to PW and turned to me and said, ” Oh, I read her, did you see what she said about iPad on her blog? ” I have to admit that PW seems to be moving farther abroad than she may realize. Thanks to the internet, not only has she young American followers like my daughter reading her, she’s picking up teen readers in rural England as well.

While PW appears to have a tidy kitchen when making her varied goodies, I must admit that my prep area looks a bit different.

Thank goodness for lots of counter space or work-tops as John would refer to kitchen counters. 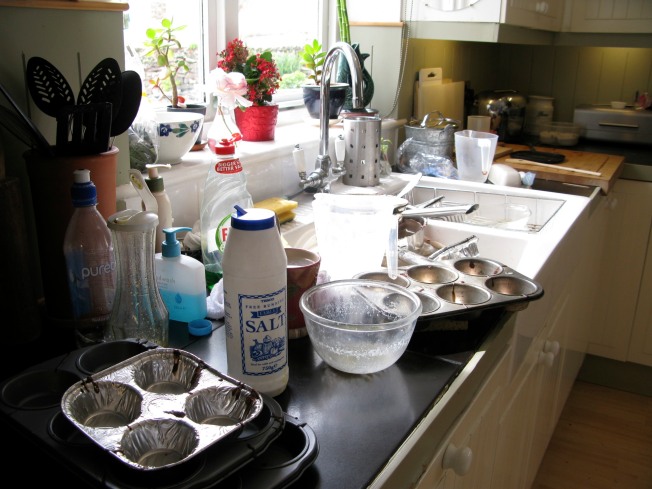 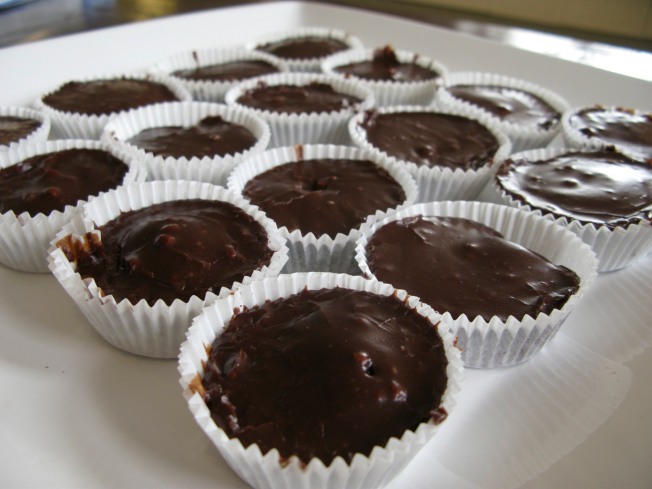 Gone, these are all gone now.

I call the cupcake closest to you, ” The Half and Half  ” for half nuts/ half not … neat huh? Okay, so I ran out of the frosting with nuts and had to use some without. I bet no one even noticed at the party last night. Creativity is key in marketing. I think I like that … Half and Half … I wonder what I could call my other kitchen mishaps.

My daughter once referred to my turkey meatloaf as looking like cat food, I must say years after that high recommendation by my then seven-year old, it’s one of the things I do best now. (Pssst, I’ll be making my cat food/turkey meatloaf for some American visitors this weekend) I promise I really do use ground turkey … no cat food involved. Cross my heart.

Remember what I said earlier about messy … I wonder who’s going to help me with these dishes!

Maybe I could do a reality show for messy cooks … how about you, are you messy or neat when whipping up family favorites?