On Christmas Eve, my step-mom’s Aunt Margaret died. Born in a small town in Alabama, she was the youngest of ten children and the last one to go. Called Marg by her family (pronounced like Mog) she was more like an older sister to Cullene than an aunt making the loss even deeper for Cullene who is an only child.

Later today she will be going with my sister Jennie to Marg’s military funeral in the town where they both grew up. I wish I could be there too. Marg was just about my favorite of Cullene’s family although she wasn’t the only one in that group that knew how to have a good time. She was quick to try to make you laugh and I always loved a visit that included her.

In declining heath after a stroke two days before turning 87, she eased gently out of life just as the much of the world was slowing down to focus on family and Christmas celebrations.

I’d like to think that there a was great party waiting for her after she let go. With nine brothers and sisters all gone before her, I can almost hear her feet on the front porch and the screen door slamming shut behind her. Her brother Bab’s there too hurrying across the room to snatch up his baby sister folding her into a big hug before shouting over his shoulder and calling the family in with the words “Hey everybody, Marg’s finally here!”

I wrote a post that included memories and more about Marg last September and have copied it below. 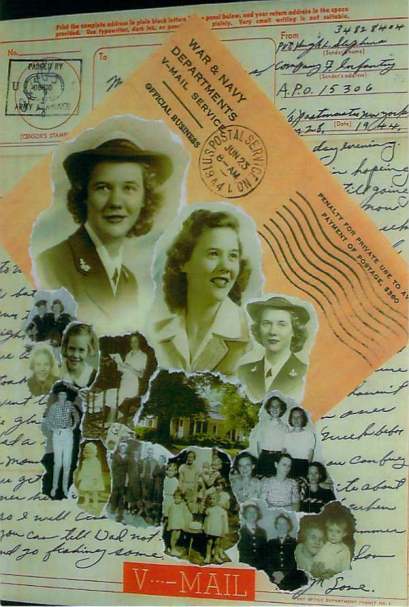 I used to make large and unusual photo collages to give as gifts to mark special occasions. I began doing it about 25 years ago when I became frustrated with the amount of photographs I was taking and the lack of ways to display them. Albums seemed tedious and too many framed images felt more like clutter than a way to share a memory.

I came across a photo in my files of one collage I made and thought some of you might be interested. It was a gift for my step-mom’s aunt Margaret who served in the Navy during WWII and stayed in long enough to retire.

Born in a small town where everyone knew and loved her, her desire to see a bigger world and the courage to venture into places where women from small towns usually didn’t go, would have made her my type of role model when I was growing up. I put this together for her 80th birthday about eight or nine years ago. It’s not my best collage, but it is one of my sentimental favorites.

It’s smaller than most of the collages I’ve done in the past, only about 24 inches tall and 14 or so wide. I didn’t have as many photos to work with as I normally do. I’m used to having loads to choose from, but because it was a surprise I had to work with what Cullene had on hand.

Knowing that the Navy was such an important part of Margaret’s life, I enlarged a V-Mail letter and envelope from my great-uncle Hugh who died towards the end of WWII. I used it as a backdrop and tried to position it so that it would not be obvious that he was writing to his parents.

I wanted to project a feel for that time during her history and thought it was a good stand-in since I didn’t have any written by Margaret. I made photo copies of the old photos Cullene gave me and tore the edges before gluing them on with rubber cement. I like to use different textures normally and this was actually a bit too glossy for me.

I also made little party favors (memory items) for each guest at the 80th party to sit at each of the place settings. I based it on a story Cullene told me about how in those days small happenings made the newspaper in the close-knit community where she and Margaret grew up.

Since she broke her arm playing on bales of cotton, I decided to make mini bales with a laminated photo copy of the news clipping attached to it. I can’t help thinking how nice it would be to live in a place where a little girl’s broken arm during play was part of the news.