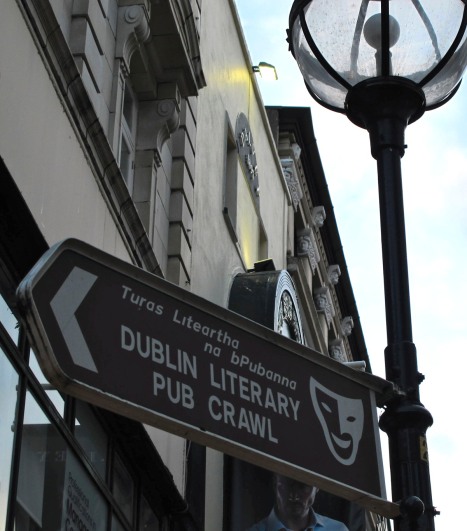 I’m a woman who believes in marking an occasion and while I’m not a big drinker, when I learned I’d be spending a weekend in Dublin, I decided it would be a perfect opportunity to have my first taste of Guinness in the place it originated. I spotted the sign above on the day we arrived and briefly and I do mean briefly, considered doing the tour, but decided since alcohol consumption was the implied expectation, I’d be a dismal failure.

We squeezed in loads of sightseeing during our Dublin experience, but it wasn’t until our last day that I had an occasion to make good on my plan to have a taste of Guinness. By Sunday afternoon we were trying to find a pub with live Irish music for David and a Guinness for me. Michael was happy leaving the choice to us and having read the reviews for the Oliver St. John Gogarty pub, we chose it for a late afternoon rest stop.

It was our only pub visit and as it turns out, the best choice I think we could have made. Having researched the man the pub is named for, I discovered Oliver St. John Gogarty was the contemporary of a many literary figures of his day and served as the inspiration for several important characters as this snippet from Wikipedia revels ” His most famous literary incarnation, however, is as Buck Mulligan, the irrepressible roommate of Stephen Dedalus in James Joyce’s Ulysses.”

I left the pub that evening assuming he’d been a publican, but discovered later that he was medical doctor, published author, playwright, and poet who was involved in Ireland’s fight for independence along with Arthur Griffith and Michael Collins.

The Gogarty pub was so much more than I’d expected and the music and atmosphere alone would have made it worth talking about, but the fish and chips … were the best I’ve ever eaten! The tartar sauce alone was good enough to make a southern woman weep.

There’s a saying I’ve heard somewhere that goes like this, “Southerners like to think that God invented fish just so there’d be a vehicle to eat tartar sauce.” Can anybody help me out with the proper quote and the origin? It sounds like something Paula Dean would say.

You can see the musicians in the distance by the windows. They provided a perfect accompaniment to the fun we had and I was well pleased with the whole experience especially the one in the photo below.

You must know by now that I like to document a lot of my expat experiences and having a taste of Guinness in Ireland is worth a snap or two. I’d heard a great deal about the taste and what to expect and I was prepared to find it too strong based on its consistency and color, but I thought tasted a bit like coffee in a way only sweeter than the black coffee I drink. It was heavier than a regular beer and felt richer like a milk smoothy in a health food bar.

While I photographed a pint, I only drank a half. That’s me as you can see having my first taste. I look a little apprehensive, but I was all smiles later. Remember … I barely drink so a few sips in and I was feeling it. 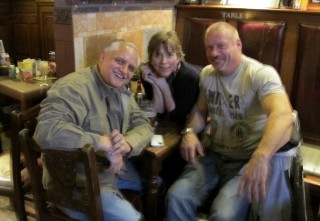 There’s one last thing I wanted to share about Gogarty and it was one I would not have expected. When his return to Ireland was delayed by WWII after completing a lecture tour in the United States, Gogarty applied for and was granted American citizenship and spent most of the rest of his life in New York where he wrote for a living after giving up medicine.

So while we skipped the literary pub crawl and our consumption of Guinness was pretty limited, we still managed to choose the one pub with something for all three of us. Without knowing the history of the man that Gogarty’s was named for, it seems a happy coincidence that a doctor (David), a published author (Michael), and a (now) Guinness loving expat (me), chose this pub to round out our Dublin experience.

Until next time … Cheers!

2 thoughts on “Pub Crawl Failure – My First Taste Of Guinness”