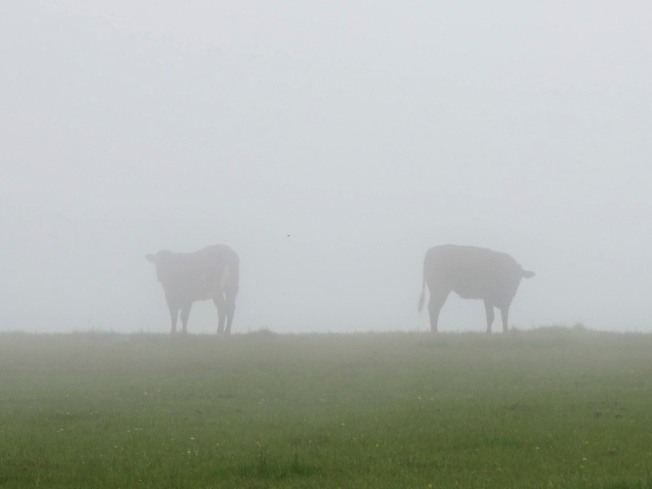 John and I drove slightly north a week ago crossing into Devon to walk a different part of the coast path. We left the car about 11:45 after stopping to pick up sandwiches and drinks and set off to see a part of the coast I’d not seen before. As it turns out, we didn’t see much of the coastline on the way to Clovelly, but there was still a great deal that caught my eye. This stretch of Devon coast was different from the Cornish coast path with abundance of trees being the obvious difference.

The birds were calling out to each other as we walked alone along the path and it felt more like the beginning of the day rather than the middle of it. I lingered as I always do taking “just one more photo” before running to catch up with John.

I was actually much farther away when I took this picture of him, but I cropped it later to bring him in closer. Look below to see me hot-footing it to close the distance between us.

John took this one of me just before I snapped the photo of him above. We could hear the waves below us through the woods to the right, but we couldn’t see a thing until we reached the bottom of the hill and moved towards the water.

I love it when we come across old buildings that make great places to frame a shot. Watching John walk past me, I saw the color contrast of the life-preserver, the signage, and the sea, and hurried to snap a few before running to catch up again.

I like how I managed to get this shot with John in the background. Can you see him above the far right edge of the pink sea-drift flowers?

Here’s what can happen when you rush to catch up. You can’t really see it here, but I’m making a face and trying catch myself from going into the water. John took this photo right as my left foot slipped off the rock and got wet. I’ve taken some funny looking tumbles in the past where I was protecting my camera on the way down. This was not one of those times and the only calamity was a wet foot.

A look back at the hill we came down and the empty remains of some old buildings that John said were used for lime kilns. 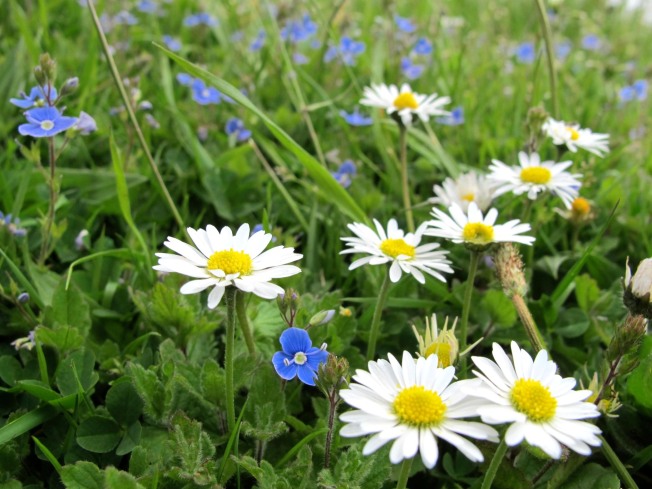 Later, we stopped in a field of what looked like mostly flowers for John to check the map. We were climbing higher and the fog was getting thicker. I considered having my sandwich there as it was getting later and I was hungry when we began, but John promised me a better spot so I put away my pretzels and carried on.

Coming into another clearing, we moved through a gate and crossed into a meadow with cows and trees that looked faint in the distance hidden still by the fog.

Hmm … my growling tummy made me consider the bench around the tree in this photo, but still I carried on.

After thinking we might walk all the way to Clovelly before stopping to eat, I came round a corner to see this special shelter tucked between the woods and the sea. It was a perfect place to have lunch and I said to John as we listened to waves below us still hidden by the fog, that this gave new meaning to the idea of taking your sandwich outside for your lunch break. Of course, I was visualizing the days when I was happy to grab a few minutes on a bench somewhere outside when I worked for about eight months in an area with no windows and the whole day could pass without my knowing it except by watching the clock. It’s easy to guess which I prefer.

Come back tomorrow for the rest of the walk into Clovelly when the fog finally lifts and the view changes.