I have never been much of a gardener although I’ve purchased more than few books over the years on designing, building, and maintaining  an outdoor space, and I can certainly perform the routine maintenance tasks that go with a typical American yards such as grass cutting, hedge trimming, and weed pulling, but living in Cornwall I’ve had a chance to slow down and appreciate the green-thumbed efforts of others like never before.

Not long after I married my husband and moved to his home in England, I met a very interesting man who at the time was in his late 80s. On my way back from a run one day, I noticed him walking slowly at the edge of the village green carrying several small bags looking as if he’d just come from the local shop. I realized as I got closer that he lived in one of the houses on a road nearby and I stopped to chat and to offer a hand with his shopping.

Walking back to his house, he told me how he use to bike around Cornwall in his 40s and his travels took him through our village. It was our good fortune that he moved here after retiring from a career in forestry service because when Dutch elm disease took most of the trees on the green in the 70s, he was part of a group of folks who replanted the trees we now enjoy.

Not long ago his house was sold after his health deteriorated and he could no longer live on his own. His house went to someone who lived locally on the edge of the village who wanted to downsize and be closer to its center. Mr. Thomas had a lovely garden although there was so much there that it was easy to over look much of what made it special. I always loved his huge hydrangea bush and an unusual pine tree that I’ll say more about in another post.

I was never much a fan of the hydrangea until I saw some of the gorgeous full ones that grow here. I think my experience in the US made me think of them as being chronically spindly with big heads.

When I saw that the lady who bought Mr. T’s house was making major changes to the front and back garden, I meant to ask about snagging the hydrangea bush if she didn’t want it. I assumed she might not after seeing it cut back to the ground, but I almost waited to late to ask.

John and I were on our way out one day and saw a truck at the house filled with roots and bits that had been in the front garden. John stopped the car when I shouted and I went around the back of the house where I could see some men using a mini digger to pull up more of the tougher roots.

After explaining my sentimental connection to our former neighbor and his hydrangea bush, I asked if I might go through the roots in the truck bed to see if I could find any parts of the hydrangea and they not only said yes, but they stopped to help me sort through it. After a bit of digging, we found a couple of limbless chunks of root and we took them home hoping we had managed to find some parts of the hydrangea.

John does the gardening and said he’d plant them the next day as he was on his way out, but I got worried and dug a couple of holes while he was away because I too impatient to wait.

I’ve been keeping watch over two root bits in particular of the four I planted a few months ago, and I was over the moon to see new shoots popping out of the two I thought were part of the hydrangea.

It may not bloom this year, but I hope it won’t be too long before it looks like it did when it was nurtured by Mr Thomas. 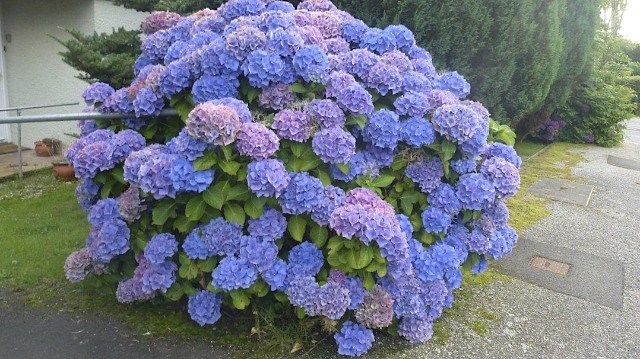 I wonder if any of you, like me, are developing a inclination towards gardening due to sentimentality.