While away in Dorset for John’s birthday in late September, we spent a day walking near the cliffs around Lulworth. This part of the Jurassic coast is famous for the limestone arch, Durdle Door. You can’t see it without doing a bit of walking so come prepared to expend some energy

As I was photographing the man above working on a shot of Durdle Door, John disappeared in another direction following after his daughter and her dog. I was so intent on what I was doing that I didn’t notice they’d left and it was only after having a good look around that I spotted them.

We had already passed this warning sign so I did not expect what I saw next.

If you look to the left about halfway down, you can see a woman in a blue coat with her dog making her way down. (You can click to enlarge) 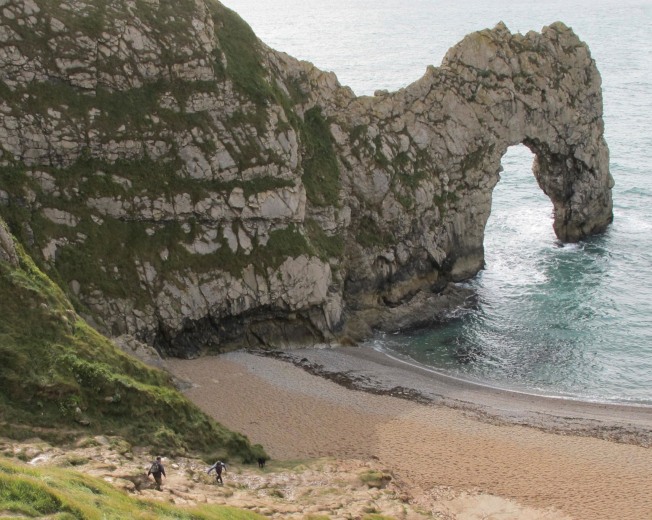 Look closely at this one and you can see a man with a backpack is with them. I’m sure you don’t need three guesses to figure out who we’re looking at here. 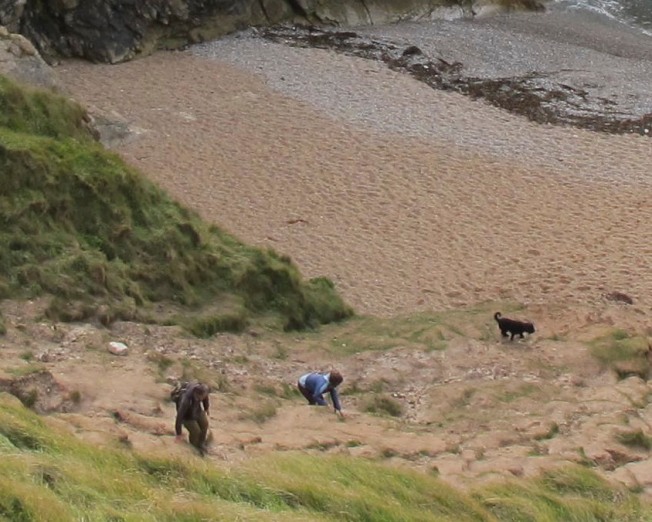 Just in case you need a bit of help, here’s a close up of the adventurous ‘rule breakers.’ Maybe they missed the sign … it’s easy to when there’s so much beauty to distract you.

Hurrying to catch up to them, I passed this barrier to the steps that normally enable walkers to reach the beach at Durdle Door. Bad weather had made it impossible to use and John and his daughter followed another path that some folks on the beach had used before them.

After seeing them reach the beach safely, I couldn’t just watch from the side of the cliff so I went down the slippery slope after them, all the while hearing the echo of every mother’s warning, ‘If your friends jumped off the cliff, would you jump too?’

Arriving safely at the bottom, I stepped down into a shifting surface that while not as soft as sand, gave way under my feet leaving impressions that announced to anyone following which way I’d gone.

Seeing Durdle Door from the beach was well worth the trip down and I felt enormously lucky to sit next to John and watch the sea. 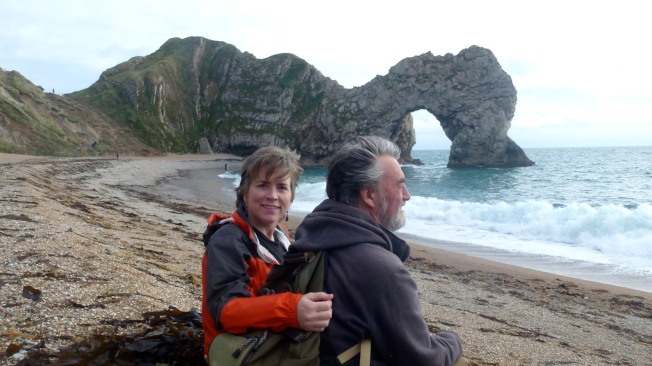 After a few photos to remember the moment, it was time to move on. 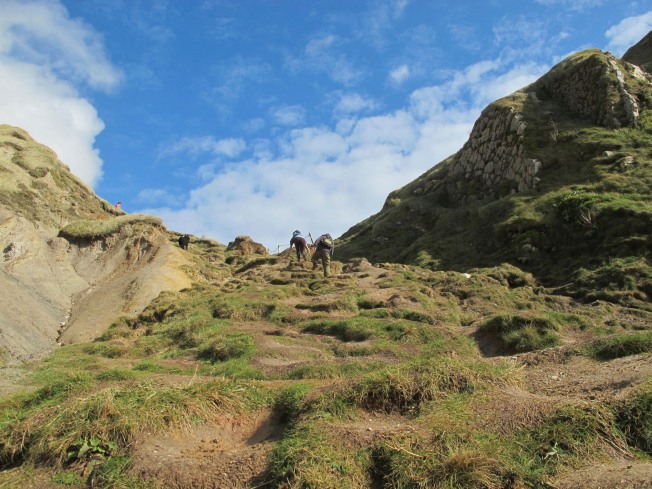 Moving on meant climbing the slippery bit to get out. John and his daughter went first, followed in the shot below, by me.

I’m in orange near the bottom and the woman in the foreground is on her way down to the beach. It was far slippery than we make it look and  I was half worried that if she came too close she might slip and take me to the bottom with her like a bowling ball picking up a spare pin. 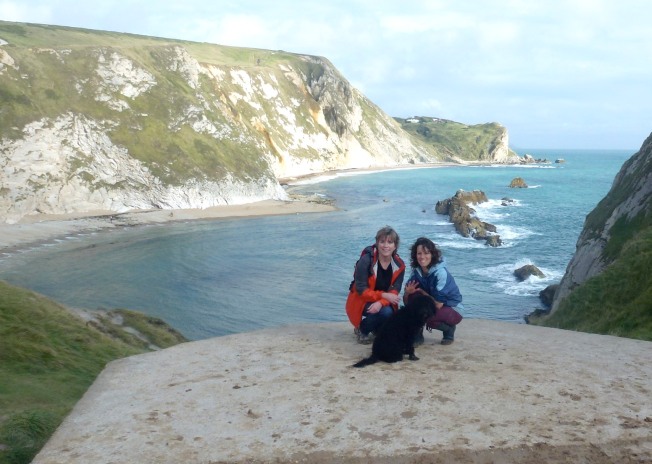 Once we were all safely at the top, John took this mud free photo of us (no one did a slip and fall) before setting off on the windy walk back to the car.

Earlier this year I had a conversation with my husband, John about his birthday and what he might like to do to celebrate it properly in the way one does a significant birthday, particularly those ending in a zero.

When you’re younger the zeros don’t matter as much as the life events that certain birthdays mark such as those that make it possible to drive a car or vote. Others may remember the birthday that allowed them to buy their first alcoholic drink and belly up to the bar legally but birthdays ending in zeros seem to be most noteworthy after a certain age.

For most of us, it begins with 30 and the recognition that we’ve arrived there faster than we’d imagined we might. After that it can feel like it’s just an eye blink or two before we’re talking about retirement plans with our girlfriends instead of our plans for the weekend.

Although John retired from the television industry at 51 after being offered an early pension, he’s been very busy in the years since buying and renovating houses before selling them on. He’s not really lived the life of a retiree, or at least what I used to think that life might look like and he’s inspired me to rethink aging and the possibilities for my life.

He didn’t want a big birthday party opting instead to have a smaller gathering with family. He picked out a rental cottage in Dorset and we spent a fun week exploring the surrounding area. The first few days saw all the family together in the five bedroom cottage and the last three we had it to ourselves.

Since it was a significant birthday celebration, I wanted to have a bit of decoration so I bought some paper bunting I saw on the store shelves last summer for the Queen’s Jubilee celebration. I tucked it away knowing I was going to use it later to display photos from John’s life. I went through hundreds of images and used about 300 that I cut or tore and glued to the precut bunting. I did this on the sly so he had no idea what I was doing or that I even planned on decorating the cottage.

I hung the bunting when he went left to pick up Rachel, his youngest, and her two daughters at the ferry. It was very late when they arrived as the ferry was delayed so when they came into the cottage he was aware that I’d decorated, but he didn’t notice what it actually was beyond some colorful bunting.

We barely had time to speak as I went upstairs to help Jersey Girl get ready for bed while Rachel carried an already sleeping baby to her room hoping not to wake her.  As I was tucking JG into bed and giving her a goodnight kiss, John came in with a sweet smile and said that he’d sat on the sofa and glanced up at the bunting and noticed the name of a boat he recognized and as he stood up for a closer look, he saw he was in the picture and then realized that he was in all the photographs. 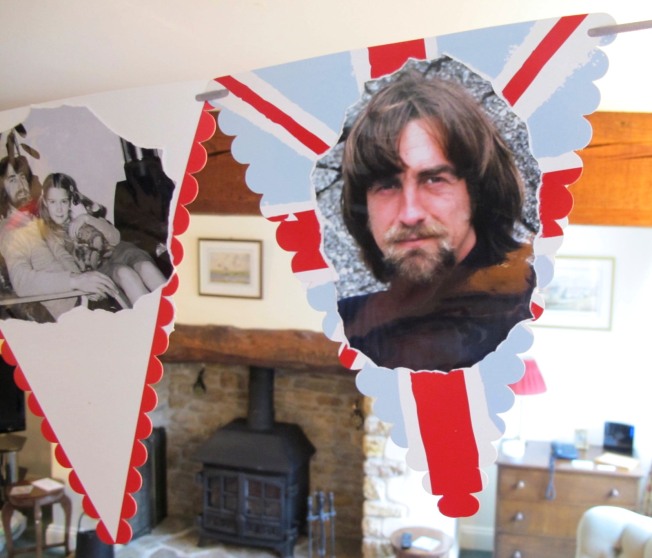 I cooked a big Italian dinner on the second night beginning with stuffed mushrooms and a hot artichoke dip before moving on to a spicy lasagna, with salad and garlic bread. I had a simple floral centerpiece, but it made the table seem crowded so you can only see it in the first photo.

We finished later with a yummy carrot cake that I made from a recipe given to me by my friend, Scott. It looks kind of funny because I baked it at home and made the frosting at the cottage, but it still tasted amazing six days later when John and I had the last of it.

Wishing On Birthday Candles … Do You?

I kind of insisted on candles on the cake which is the reason for the bossy sounding title of this post. I’m a firm believer in making a wish on your birthday no matter what your age. John was a good sport about blowing out the candles, but he didn’t make a wish.

Later in the evening I snapped a photo of some of the empty bottles by the door … I think they may have added one more after I took this. 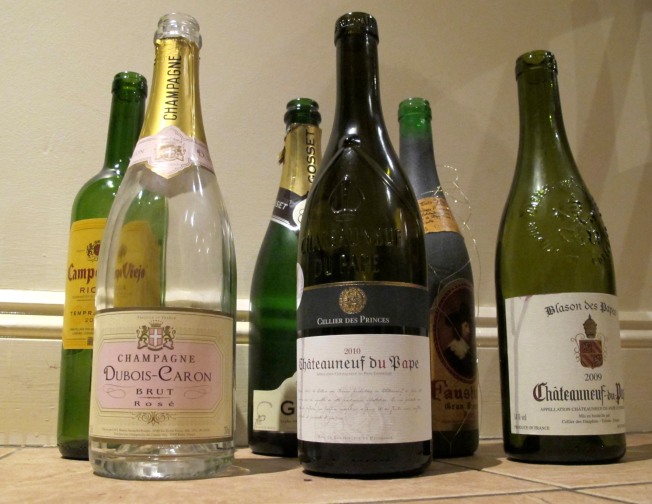 Gifts
John received some lovely gifts, one being a weekend away in Wales that came from his daughters. They scheduled it for our wedding anniversary weekend so I get to enjoy it too! His brother, David gave him a Magnolia tree and I had something special made for him that I’ll show you in my next post.
Party Favors
I was so focused on food that I had to forgo a cute idea that I thought of too late to complete. Given a bit more time, I would have framed a tiny photo from the past of John with each person at the party and used it as a place card to show where people should sit at dinner. It would have been nice party favor to send home with them afterwards as a reminder.
My Gift  … Here’s A Hint 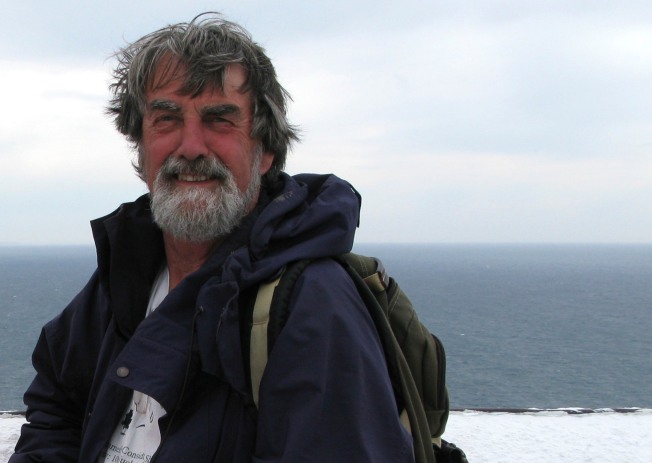 Don’t forget to come back and see what I gave him. I think you are going to like it.
Join 443 other subscribers