You may not know it, but my husband, John does a bit of writing too. He tends to focus most of his efforts on his genealogy pages having picked up the research bug that bit his father years ago. One could easily say that his dad’s initial interest actually started when faced with a question from John that he couldn’t answer about a relative listed in the family bible.

Today marks what would have been his father’s one hundredth birthday and John has written a lovely piece about his dad who was born in the same year the first world war began. If you are interested in seeing more images and learning a bit more about his life, you can find it by clicking on the name,

I love the way internet links are able to act as a kind of map helping those with common ancestors find each other and connect to family lines that might otherwise be lost to history.

John’s genealogy pages have brought him into contact with other relatives who having searched for family name found their way to his site. Especially poignant to me was an email not so long ago when a cousin in Canada contacted him after seeing her grandfather, George Arthur Gadesby Smith’s face in a photo for the first time after her search led her John’s website. Her grandfather was brother to John’s maternal grandmother and after George Smith died during WWI leaving a wife and two children,  his widow remarried and immigrated to Canada causing that link to be lost until a few years ago.

Having met John later in life, I never had an opportunity to meet his dad, but I’ve heard enough stories to be able to see where some of John’s gentle nature and compassion likely come from.

If you have an interest, the blue links will take you to John’s website and the sweet birthday piece he wrote to honor his dad. 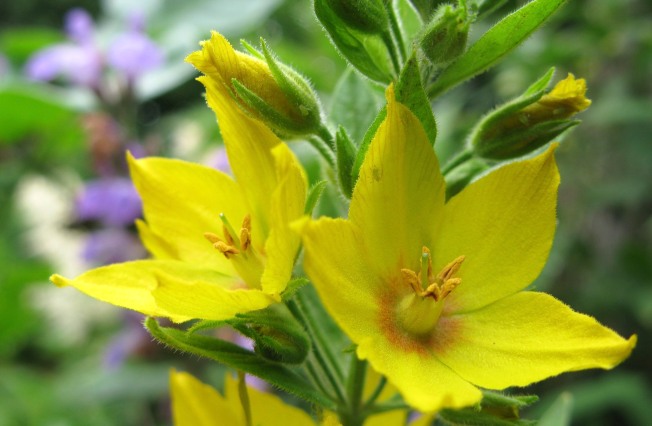 There is a flower in our garden that John always refers to as Auntie Norah’s Weed. It’s interesting to me that as much as he knows about gardening and proper plant names that he seems content to identify this flowering plant in the way that he does.

Some of you may not know that my husband John has done a great deal of research into his family history picking up on the work done by his father before he died. He likes to tell stories of how his dad was so into genealogy that at the age of 81 he flew to Singapore and Australia for three weeks on his own to attend several conferences.

It was Auntie Norah who started it all though. In 1961 John recorded this bit of conversation between Auntie Norah and his grandmother Marie where they’re discussing some relatives and family history with him. John is only eighteen in this recording.

Here’s a bit from the website of John Winchurch:

“Norah was my great aunt and her sister Marie my grandmother. They are pictured above about 1903. It was a conversation between Norah and Marie in 1961 that was an early inspiration for both me and my father to look into family history more. Dad began straight away, my research had to wait a few decades.

At this point, at the age of eighteen, I was fascinated by sound recording and had just built my second tape recorder. My family provided the material for testing its capabilities.This is one short excerpt that I am particularly glad I captured.Norah talks about ‘mother’s father’s father’ being a ‘wonderful violinist’ and ‘coming over with a German band’

Listen to Auntie Norah in forty seconds of history.  ( You can hear John at 20 and 22 seconds into the recording)

She was almost right, Francis George Sternberg was actually a generation further back and was a trumpeter with the Royal Horse Guards. He settled in Northampton, married Frances Furnivall and established himself and his family in a music retail and education business.At the time of this recording in 1961, it was two hundred years since Francis’s birth. It is an interesting example of how family information can be passed down the generations.“

To finish this post which began about Auntie Norah’s Weed I want to tell you a bit more about her. John’s grandmother was one of three sisters with Norah being the eldest by three years. As Norah never married it was she who took care of their aging mother living with her until she died leaving Norah alone at sixty-six.

She worked at several jobs during her lifetime in libraries in the area and took tons of photographs over the years as an avid hobbyist. In her 80’s when she could no longer live alone she came to live with her sister John’s grandmother Marie who was by then in her 80’s as well.

With Norah crowding into the small home already occupied by her sister, John’s mother, father, and brother she had to get rid of many things during her move. With so much family in one space, Auntie Norah did a big clear out even trying to get rid of many of her family photograph albums which were rescued from the rubbish bin.

One thing she couldn’t leave behind was the yellow flower you see above. While this is not one of her original plants, it is the same type of flower that John’s grandmother labeled a weed based on the way it overtook the garden. Aside from Auntie Norah’s Weed, when I asked John what he remembered most about her he quickly said her laughter. He said she was always laughing and you can hear it on the link above that John recorded in 1961.

Sitting in my studio I can see Auntie Norah’s Weed growing across the garden in an almost direct sight line to my desk. While the garden space is compact, as lovely as this flower is I cannot imagine a time when I would ever not appreciate the brightness it adds to my daily view.

Of course it might be nice to know its proper name if any gardeners out there want to pass it on, but personally … I like remembering the laughing spirit of a woman I never knew and hope Auntie Norah’s Weed spreads its roots as deeply in the garden as she has now in my memory.