As open I have been in revealing my new space over the last few days, there is a still a lot that you don’t see. Carolyn commented that my post yesterday was one of my most intimate and she was right. The books we choose say a great deal about who we are or sometimes, who we wish to be.

Patrice shared in a comment how she was one of the friends I invited to come see if there were any books that she wanted when I was trying to cull them before my move from America. Along with books on art and decorating, she took away some of my self-help books. I have read quite a few over the years as I tried to deal with the repercussions of a traumatic early life, but as Mariellen mentioned with her nod to my Jon Kabat-Zinn still on the shelf, you can see I kept a few that were more helpful than others. Some of those that remain have become ongoing resources for me on the path to reclaiming myself.

John will probably blanch several shades of red or white (funny how I make him sound like a wine) when he reads this post as his first instinct is to revisit his belief that Americans spend excessive amounts of time and money on therapy and engage in far too much self-help speak. Even with all of the conversations we’ve had about this topic, he still shows an innate sense of compassion and understanding when it comes to people and my needs in particular.

If you feel as if you’ve had a deep enough look into my ‘ personal ‘ space then you might want to stop now and come back next week when I will be showing some pretty pictures of our recent trip to Wales, but if you want to hang around for a bit more ‘ Show & Tell ‘ I am quite happy to share more of the stories that go with the photographs I posted yesterday. 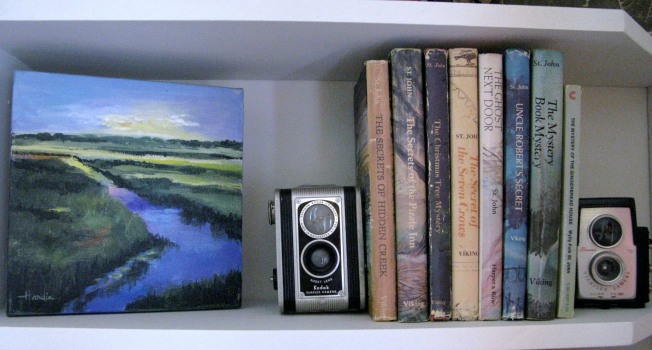 This shelf holds several things which work together for me. You can see the well read collection of some of my great aunt, Wylly Folk St. John’s books that she wrote for children. They are temporarily held in place by some of my old family cameras, but there are some extra special bookends coming in the mail that will add a new element to the story. The painting was a gift from two special people who I’ve talked about here. It always makes me think of them as well as reminding me of Savannah, Georgia where Aunt Wylly grew up with her brother Walton, who was my grandfather. 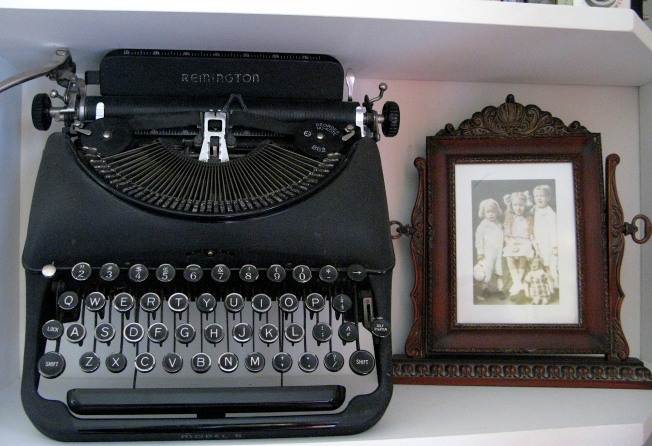 The typewriter is an old portable that sits next to a photograph of my Aunt Wylly, with her brothers Walton and Johnny, who worked as a cartoonist for Walt Disney. My grandfather co-owned a book business with my grandmother Elizabeth and a few of those books made their way here too. My sister Margaret gave me this photograph as a gift a few years ago and it remains very special to me. 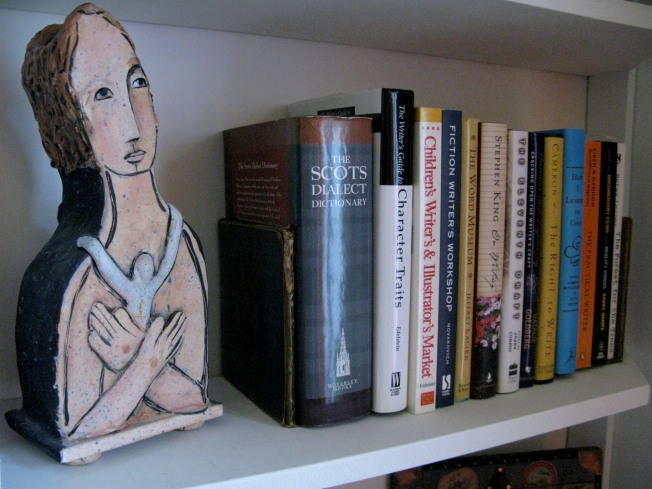 One of my favorite pieces of art that I own is a sculpture by Atlanta artist, Debra Fritts whose work has changed a bit since I bought this piece at The Dogwood Festival in the early 90’s. When I bought it, she saw me deliberating before my purchase and said, ” You must be a mother? ” To which I said, ” Yes, I am, but that’s not why I’m drawn to this. It has to do with reclaiming a piece of myself.” Over the years it has come to represent different things to me, but I still feel a little heart twinge when I think about what my life was like back then versus now. It’s no accident that it shares a space with some of my books on writing. 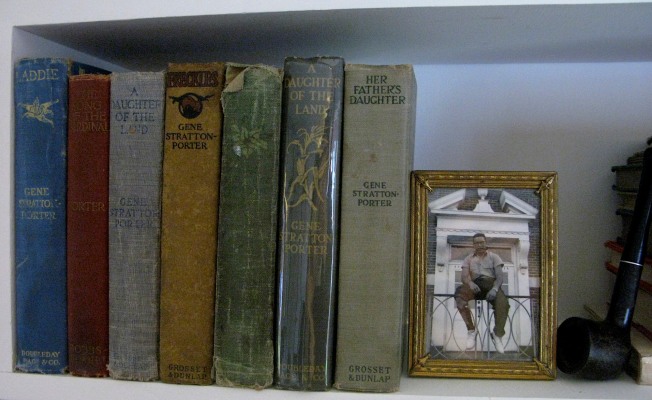 Gene Stratton-Porter is an author I collected until a few years ago. Her most popular young adult novel was Freckles, but Girl of the Limberlost remains my favorite and the closest to my heart. The mother-daughter story resonates with my own story and my relationship with my missing mother. The irony is not lost on me that she gave me my first GSP book, Girl of the Limberlost as well as Her Father’s Daughter, handing it to me as she was putting me on a plane to him at fourteen. 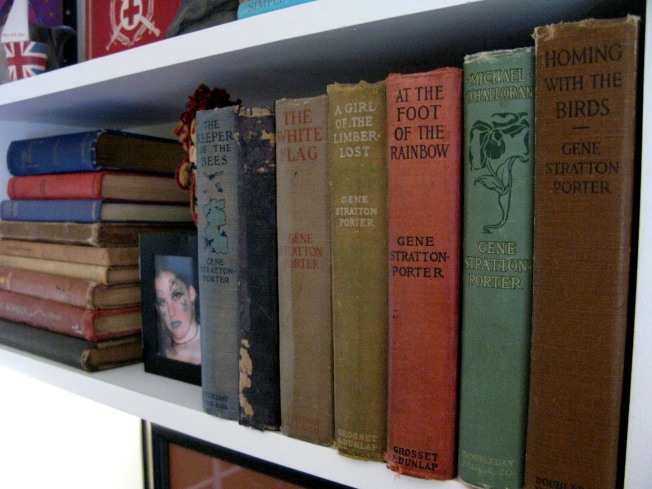 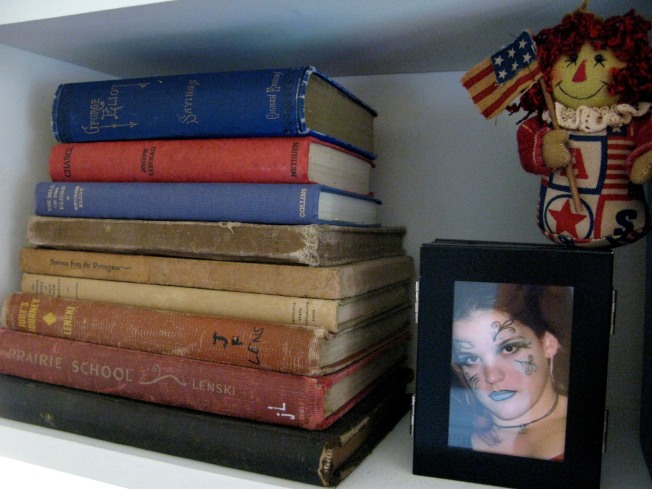 In addition to one of my favorite photographs of my daughter during her teen years taken after she and some of her friends had been playing with face paint, you can see a special ornament that I wrote about here. In the book stack are some that are significant for a number of reasons, but the ones I remember most from childhood are the Lois Lenski books with my favorite being Judy’s Journey. My mother gave it me to read during a cross country road trip that accompanied one of our many moves during my childhood. By the time I was fourteen, I had been to ten different schools with four transfers during one school year. Written in 1947, Judy’s Journey was about a poor child who worked in farmers fields with her migrant family and while I never picked cotton to earn my next meal, there was much I identified with in the children’s lives that Lenski  portrayed in her stories. 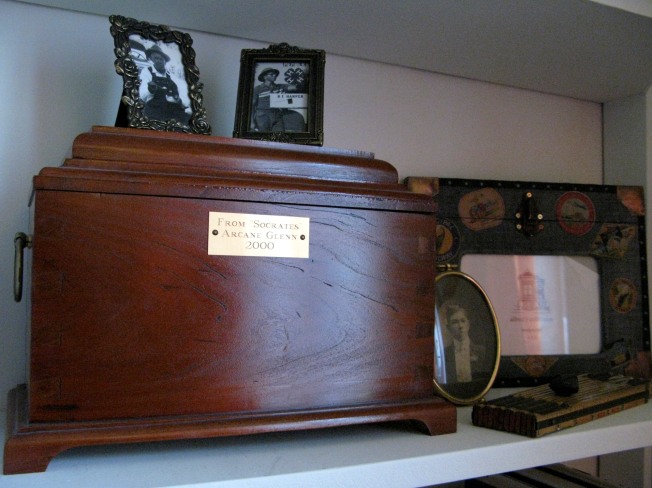 This wooden box is made from a tree that was my father’s favorite which he called Socrates. When he died and the family home was sold, my step-mom had the tree cut down (it would have been taken down anyway) and had a box made for each of my father’s three daughters. The folding yardstick was his and there is a small picture of him as a teenage boy holding a hammer after finishing a sign for the mailbox for a 4-H project. Notice he is wearing the hat that you can see hanging here on our wall in Cornwall. The travel frame is waiting for a picture of me with Miranda and the other two small pictures are of my great-grandfather as a young man and as an older one eating homemade ice cream in the overalls he always wore. 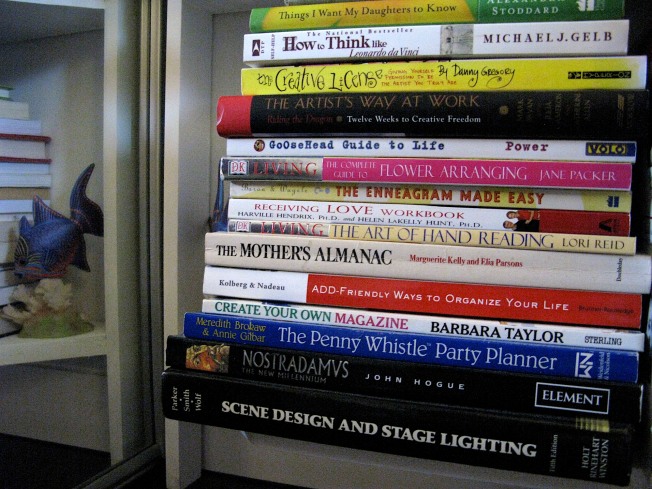 I have quite a few books on writing on other shelves along with more of my favorite authors, but I’ll make this my last revealing photo for the day. Here you see a mix of books that I know some of you will recognize such as The Artist’s Way At Work and The Creative License along with How to Think like Leonardo da Vinci.

My really special books here are the ones that speak to the mother in me. My old copy of The Mother’s Almanac which I’ve had since my daughter was three months old and The Penny Whistle Party Planner were great resources for a number of years and were two books I just could not part with even though at 22 my daughter is far from needing anything I might find in them now. Finally, the little fish is one of the very first mother’s day gifts that my daughter picked out herself when she was very young so of course it had to come Cornwall. It makes me smile to remember her face when I opened it.