Growing up, my world view was severely limited by the life I had with my mother and step-father. In their house, anything normal was considered a privilege which could include everything but breathing, depending on their mood. Television and music fell directly in the privilege column and were both a tightly controlled experience that didn’t happen all that often.

Music was limited to their mostly country collection of artists like Charlie Rich, Tanya Tucker, and Glen Campbell and if I was lucky, they might mix in a little Elvis which fortunately was more vintage 50s than the music of the jumpsuit wearing 70s. It turns out that I like a fair amount of country music artists now, but back then I yearned for something more.

I didn’t know what more might be until I heard Three Dog Night’s “Joy To The World” blasting through a classmate’s transistor radio on the school bus ride home. I know some of you youngsters are likely thinking, “Transistor radio, what year is she even talking about?” I think I was about eleven so it would have been around 1971 and I was hooked from the moment I heard the words, “Jeremiah was a bullfrog.”

I remember some of the kids were practically dancing in their seats and the boy holding the radio was up on his knees encouraging those closest to him. In my mind he is eternally cute and definitely crush worthy, especially to someone who’d been living in what felt like musical wasteland while the rest of the world was listening to more variety.

By 1974, I’d moved to Georgia to live with my dad and step-mom. My father worked with someone who was taking his daughter and one of her friends to a concert and they invited me to join them. When my dad dropped me off at their house, the man he worked with said, ” They’ll be down in a minute, they’ve been listening ‘The White Album’ all afternoon.” I remember it was said in a way that assumed I knew what he was talking about which would have been a reasonable given the concert we going to.

Sadly, I had no idea what he was talking about and at 14, I didn’t even know who The Beatles were. It was November 28, 1974 and George Harrison, Ravi Shankar, and Billy Preston were playing the Omni in Atlanta, a venue that was torn down in 1997. A few things still stand out for me when I think about my first concert and it was the recent death of Ravi Shankar that made me remember George Harrison singing “My Sweet Lord,”and Billy Preston dancing as he sang “Will It Go Round In Circles”

I’ve been to loads of concerts since 1974 and worked backstage at a few of them over the years as well. When I read the news last week about Ravi Shankar’s death, I went back to my studio space and pulled out a box filled with notebooks that hold half-written stories and ideas for more that I might write one day. Tucked into the mix was a program from that first concert. 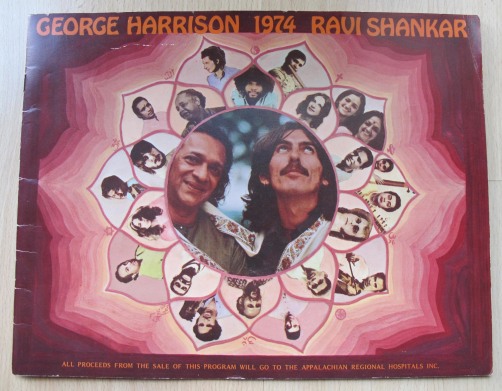 It’s kind of funny what I’ve held onto over the years and interesting that this souvenir made the cut when I shipped my 200 cubic feet  of remaining stuff to England.

I’d be curious to know the first song you remember and your first concert if you’d like to share it in a comment below.
Join 443 other subscribers