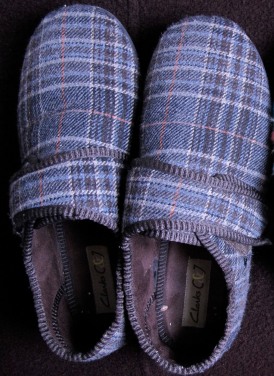 I gave my husband a pair of slippers as one of his Christmas gifts. He’d needed a pair for a while and had been walking around in red wellie socks for several months looking like a movie extra in Dr. Zhivago, one of his favorite films.

Finding them was no easy task. He is particular about his feet and while they are not big, he prefers a looser fitting shoe with a bit of extra width. I found Clarks, King Switch slippers in a nearby town and they’ve been perfect.

Too perfect, in fact.

Before I say any more, I want to let you know that I have John’s permission to share this next part.

Lately, John’s been going on walk-about in his slippers. It began one night about a week ago when he set off on foot to meet me and some friends at the pub. He noted privately to me that he was running a bit late as he’d walked half-way there before realizing he was wearing his house slippers. We had a little laugh about it and went on with our evening.

A few days later, John dropped me at my evening spin class and went off to do some shopping. When we got home later that evening, I noticed he was carrying a bag of groceries in one hand and his slippers in the other. On his feet were hiking shoes that he keeps in the back of the car for impromptu coast path walks which confirmed what I knew before I asked, ‘Did you go out in your slippers again?’

He said yes with a slight bit of exasperation and after I had a laugh, I said, ‘You didn’t wear them into the store, did you?’ He said he went into Asda to pick up a few things and went up to their shoe area to see if they had a canvas shoe he’d bought in the past. He’s been looking for his size for some time and when he didn’t see it, he decided to try on a different style to see if it might be a good substitute.

Looking down to take off a shoe to try on one of the new ones, he realized he was still wearing his slippers and said, ‘Oh, bugger!’ Then he remembered that he had just done the grocery shopping at Morrison’s and said, ‘Double bugger’ before hurrying back to the car to change.

I asked him if he saw any of our neighbors while he was out as it’s unusual not to run into someone we know. He said no and that they’d probably gone the other way after seeing him coming down the aisle in his slippers. He said they’d probably thought, ‘Poor old chap’ if they had seen him, although as quickly as he likes to move through the store, I’d say it’s unlikely anyone had a chance to notice his feet.

We had a pretty big laugh over the visual he would have presented shopping in slippers. After that, I wondered what makes Clarks slippers feel so different than his previous ones … I gave them a good going over and after talking with John, decided it must be down to two areas.

It turns out that the solid no slip soles on Clarks slippers along with the firm bit across the top contribute to the solid shoe-like feel. 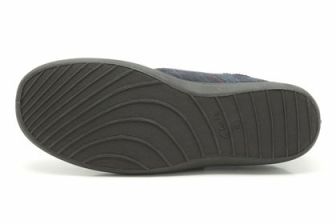 I told him if they were as comfortable as he said they were, I was going back to the Clarks store to buy a few more to tuck back for when these wear out. He jokingly said he might try them on the TMB the next time we walk it.

That would be an interesting test … 105 miles through the Alps in his slippers. What would people say?

I never forget to exchange my slippers for shoes before leaving the house … I wonder why? 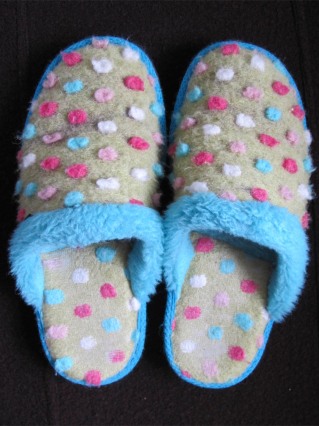 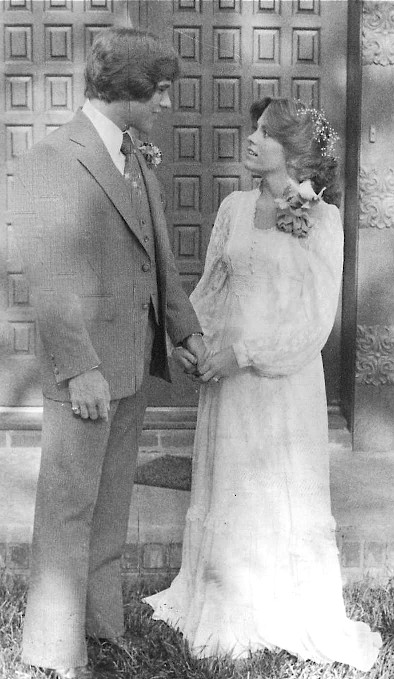 The American tradition of a prom night bash for teens migrated to the UK some time ago and a conversation with some of the girls at our pub about their dresses sent me searching through my files for a photo of mine. I seem to remember floor length and sweet as being very in style in 1977 unlike what I think of as the “sexy too soon” look that has been the rage for a long time.

I’d be willing to bet none of the girls I talked with will be wearing anything as demure as my cream-colored Gunne Sax dress with all of its lace, and pearl buttons. I’m not saying sleek and glamorous should be ditched in favor of a dress that looks as if you’re practicing for a premature walk down the wedding aisle, but do girls have really to look so old, so soon?

In the photo above, I’m standing in front of my high school sweetheart’s house making some serious googly-eyes at him. Looking at it now you’d never believe the experience we’d shared less than an hour or so earlier when he’d arrived at my house to pick me up for the evening.

I’d spent all afternoon getting ready as I struggled to make my normally stick straight hair bend to my will. It took less time than I expected so I was ready before my date was due to arrive. My step-mom, Cullene saw his car (no limo for us) coming through the trees down the long gravel road that connected our home in the woods to the rest of the world. She suggested that I should go back upstairs so I could come down the curving staircase and make an entrance befitting my dress and the occasion.

Lifting the hem of my dress a few inches so as not to trip, I ran up the stairs and stood off to one side so I couldn’t be seen from below. I listened as my dad opened the door and greeted my boyfriend and then heard Cullene say, “Elizabeth, Scott’s here.” Pausing for a moment at the top of the stairs, I looked down over the railing smiling at my boyfriend who was wearing a dark suit that he could wear again instead renting a pastel tux, a look that was very popular that year.

It was the most dressed up I’d ever seen him as he lived in jeans and t-shirts no matter what the season, but I didn’t have time to think about how handsome he looked or what he might be thinking about my dress because as my eyes met his and I took the second step intending to glide down the stairs like a romantic figure in a Jane Austin novel, my new shoes slipped on the carpet causing my feet to go straight out in front of me as the heels of my shoes snapped off. I hit the stairs hard and slid on my backside, bumping down three or four steps before coming to a stop.

I was shocked out of my embarrassment when I heard Cullene say, ” Oh Elizabeth! Are you okay? ” Almost as soon as I said, ” Yes,” I heard my family begin to laugh nervously as if they were having trouble keeping it in but didn’t want to hurt my feelings. I was laughing too before long and poor Scott, who didn’t know what to make of us by now laughing like we were coming unglued, shook his head and walked towards the door doing his best to keep from losing it too.

After realizing my high-heeled opened toed sandals had suddenly become flats, I worried aloud about what to do for shoes until my dad grabbed a hammer and some small nails and pieced them back together so we could go on to the prom.

There are of course other parts of the evening that I remember, such as our expensive dinner with its tiny portions and the grandness the Fox Theatre’s Egyptian Ballroom, but the most memorable moment for me remains my dramatic entrance and how quickly I bounced back afterwards.

I’d love to hear your prom night stories if you have one or a most embarrassing moment if you’re feeling brave.