Wednesday night you will generally find us down at the pub having a bite of dinner and enjoying a little friendly competition with the folks who turn up for Quiz Night. I have written about this before on my old blog here and mentioned it in a few other places as well.

John and I tend to be somewhere in the middle of the teams and don’t often move too far up or down in the rankings from week to week. There are some brainy groups who always seem to win or at least finish in the top three, but it’s rarely been us. Well, once we did finish first, but we were part of a team of six instead of our usual two so while it was fun, it didn’t feel as sweet as it did last night.

I have to say here that I always feel a bit of pressure when there is what people in the pub would refer to as an ” American” question. Last night, we played with Jean and Robert who were also at the pasty making competition. They always do well and frequently win or come in second so we had a much better chance right from the beginning than we normally do.

It was a killer quiz and seemed much more difficult than usual and I struggled as I often do to come up with the answers to questions I think of as ” British” questions. One example of this might be a rugby question about a famous player from 1970. Now there is no way I am going to get a question like that one right, but the pressure is always on when it’s about something related to American trivia.

Last night’s combination of Jean, Robert, and John left little for me to do much of the time as they were usually whispering the answers to each other while I was still digesting the question. In fact, there were only two questions I answered that my teammates needed help on and while I knew a few others, they were the type most of us would know.

I am often teased here in a good-naturedly way about my competitiveness which I prefer to laughingly call enthusiasm. One example of my “Enthusiastic nature ” might be the difference in how I react when the answers are read at the end of the quiz. In a room full of people who at most give off a soft murmuring sound when they’ve found they have answered a tough question correctly, my loud ” YES! ” coming out of the corner tends to draw a bit of attention.

Last night, there were two questions like this for us, questions that I answered that no one on our team could answer. I can’t remember them both, but the one that stands out was, ” What was Nancy Reagan’s maiden name ?”  It seems easy until everyone looks at you for the answer since it’s an American question and for a few minutes I was blank only remembering it when I thought of her daughter Patti Davis who used her mother’s maiden name after disagreeing with her father’s politics.

After we placed first, I was excited, but felt like it was more their victory than mine as I had only known two answers that they couldn’t get on their own. This morning though I can see it a bit differently. While writing the details of last nights win, I just realized that the points difference last night between first and second place was … two questions. 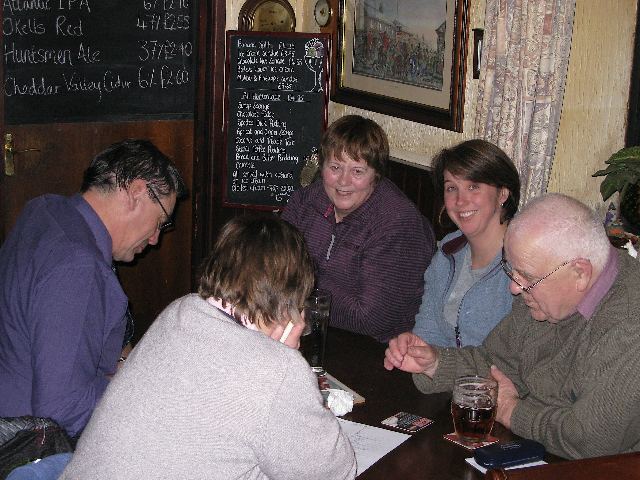 This is the regular team of folks that Jean and Robert usually play with on quiz night. Robert and Jean are in the darker purple shirts at one end of the table with Helen and Jeff at the other. Karen is sitting in between Jean and Jeff and has moved back to Canada recently freeing up a spot on their team. Jeff and Helen couldn’t be there last night so we joined Jean and Robert to create the Anglo-American Alliance.

Sometimes on Wednesday nights John and I walk down to the pub and because Wednesday is trivia night, we usually have a bite of dinner and stay to play trivia. We tend to end up somewhere in the middle of all the other teams rarely scoring enough to be considered a contender for first place although we do have a lot of fun. Once we came in second, but we’re usually quite happy with third or fourth place. Poor John is a good bit handicapped with me as a game partner since at least two-thirds of the questions are related to British life and history. Sometimes, I know the answer to those, but frequently he’s on his own.

Tonight was a particularly significant game night as we joined forces with a group of four who always do much better than we do and it was the first time we won. That’s right a big old first place. We didn’t let it go to our heads as we could see by our participation what we might have missed if we had been on our own. Jean and Robert were two of the team members tonight and I think it was at a trivia night that I first met the little dog in the picture above.

Jasper as you can see by the photograph is a cutie. He’s getting on in years, but always is very friendly and happy to share any part of your dinner that you’re willing to give up when he comes to the pub with them on quiz night. Our pub like some others I’ve seen always welcomes a dog as long as the dog remains controlled and on a lead. (leash)

In our pub, dogs always get a treat from the bartender when they come in. I was quite charmed by this when I saw it the first time, but I never realized the impact it had on some dogs until I heard Jean tell a story about her dog Jasper.

It seems one day Jean was getting ready to take her dogs for a walk. Jasper and Molly enjoy an outing now and then, but they’re not always in a hurry to head out the door.  One evening while getting Molly together for a walk, Jean looked around for Jasper and could find him anywhere. In fact the place where he usually sat waiting near the gate was empty as if he had waited for Molly to get it together for the last time.

Realizing that Jasper appeared to have grown tired of waiting and worried that he might be headed for open road, Jean began to look everywhere for her little dog. She walked back and forth in front of the house then around to the back garden and up the road in the direction they usually walked calling his name concerned about where he might be.

Going down the hill, she walked past her house towards the village green thinking it a fine open space that might appeal to any dog, but a quick sweep of the center of the village told her Jasper was not hiding in the grassy area. Seeing the open door of the pub, she walked quickly in that direction intending to ask inside if anyone had happened to see her little runaway. As her eyes adjusted to the pub’s darkened interior with the rows of mugs lining the ceiling absorbing most of the natural light, she saw Jasper sitting near the bar like a regular coming in for his evening pint. Jasper it seems had decided a chewy sounded good and he had taken himself off to the pub to get one on his own.

I believe if I remember the story correctly, he had been given one to chew on while the pub staff considered what they should do next. Assuming correctly that Jean and Robert might not be far behind, they made Jasper comfortable and waited.