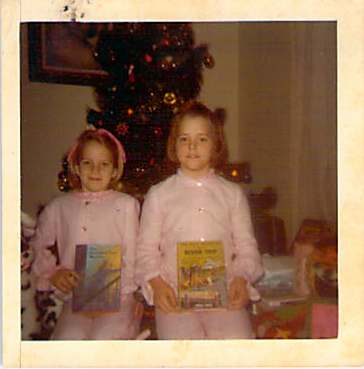 ” To me, children’s literature is for escape. Children read to get away from all the bad things in life. “

I found the quote above in an interview clipped from a newspaper and tucked inside a book written by my Aunt Wylly. Finding it this morning was in a way like receiving a last gift box from her. If you’ve spent any time on my blog, you will know that my great aunt, Wylly Folk St. John was a writer who while writing a great many things on a variety of topics, was most well known for her work as a children’s book author. As my grandfather’s only sister, she always remembered us with gifts at Christmas and on birthdays with each one seeming as if she had picked it out especially with us in mind.

No gift box from Aunt Wylly was ever complete without a book and I always looked forward to seeing what kind of mystery was waiting for us. In addition to books, unusually wrapped gifts were stuffed into the scruffy brown boxes that always seemed too small to contain everything that came out of them. It was sort of like Mary Poppin’s handbag with more stuff coming out than could have possibly fit inside.

As I grew older, I learned she bought gifts all year round and kept them in what she liked to refer to as her, ” Christmas closet. ”  Once on a visit to her home in Social Circle, I saw her disappear behind an already closed door she had opened just enough to slip inside. After being gone for a few minutes, she returned carrying something that smelled like the packages that arrived twice a year.

Well into our adult years, Margaret and I would talk about the excitement we had felt as children when a box arrived with Aunt Wylly’s familiar handwriting on the shipping label. Both of us would always do the same thing as the box was opened taking a deep breath and breathing in the familiar scent that we associated with our aunt. There was something dependable and constant about the way her gifts smelled the same every time and even though we couldn’t identify it completely, we later realized it was the scent of her home and daily life.

This year as you may remember, I went back to what was Aunt Wylly’s cabin when she was alive. My cousins inherited it from their mother when she died suddenly last year and have made the tough decision to sell the cabin because it is no longer possible to keep it. While I was spending the day with them, I decided to share the story of the gift boxes, the Christmas closet, and the scent that was so special to me and Margaret.

Not too far into my story, two of my cousins said in unison that the Christmas closet was the whole bedroom (which explained the constantly closed door) and they said that the the long unidentified scent that smelled like Aunt Wylly’s house was … can you guess … it was mothballs.

So this year when I sent my Christmas package to my sister Margaret and her family in Alaska, I tucked a couple of mothballs into the shipping box overnight and then emptied it and left it open to air for a day or two. Then I wrapped up the gifts in the same way Aunt Wylly might have done with the kind of paper and string you see on discount in the value shoppers aisle. Just before I sealed it and shipped it, I took a little sniff and there it was again … Aunt Wylly’s house.

I said nothing to my sister and when it arrived, she opened the box and told me later that the first thing she thought of was Aunt Wylly as the familiar scent of one of our dearest childhood memories drifted up from my box of gifts.

At least twenty-five years after receiving the last gift box from Aunt Wylly, it made me smile to be able to share that again with Margaret and to know that the mystery has been solved.

Speaking of mysteries, Margaret is holding a copy of The Christmas Tree Mystery, a book written by our aunt and one in which the key characters are modeled after the two of us. Like all of her books, it’s filled with clues, but this one has a plot which has Elizabeth trying to right a wrong after jumping to conclusions and Margaret doing all she can to support her so that together they solve the mystery.

That’s supposed to be me on the cover with the light making my hair look blondish. My character has brown hair and eyes just as I do. 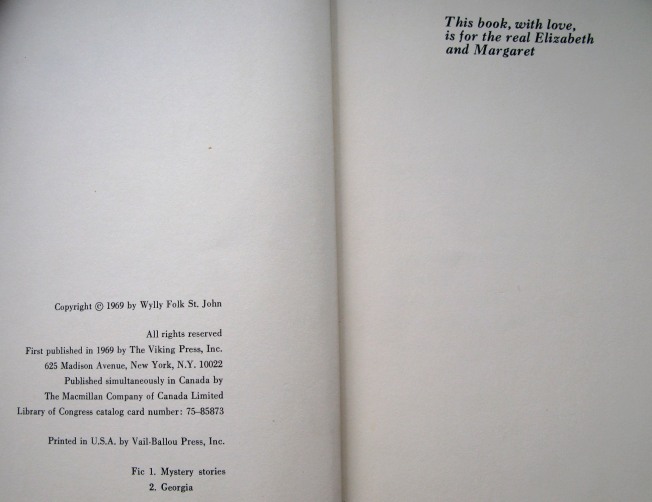 I always liked seeing the part about  ” … for the real Elizabeth and Margaret, ”  at the top on the dedication page.

This page always makes me smile too. 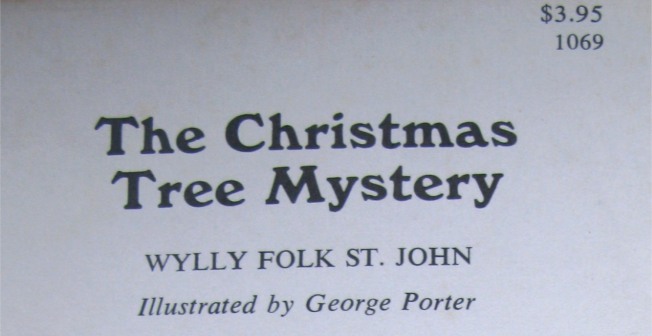 I include this page so you can see how little a 141 page hard back children’s book sold for in 1969. It seems as if you would have to sell a lot of books at $3.95 to make a good living doing it.