The morning after the BIG snow!

Okay, maybe it wasn’t really a big snow to some of you out there and I’ll admit when I lived in Oswego NY for two winters, I had a chance to see snow measured in feet not inches, but for Cornwall…this was a good bit of ground cover. If you read yesterday’s post, you saw the picture I took of John’s daughter and granddaughter walking down a snowy road as they hiked out of the village. The goal was to walk the 2+ miles from the house on the hill to the main road to meet a taxi at a pre-set time.

You may have noticed that I was standing a fair distance from where they were when I took the photograph. It wasn’t because I decided it would make a great shot and so decided to hang out and wait for it, but because I was running to try to catch up. When I came in from my big hike alone through the snow, John told me that his younger daughter and granddaughter were walking out and that we should go with them. I hadn’t even packed yet thinking that I would have time to before we left especially with our previous plan to drive to Bristol to catch our plane. John asked if I could be ready in 30 minutes or less.

Grabbing our backpacks from the attic so we could carry our stuff out on our backs, we began to toss things in fairly quickly. I was moving so fast, I could barely think about what I needed to take.  As we were packing, they set out ahead of us because it was a long way through the snow for a 4 year old. John followed them not long after with his backpack and a small duffel bag with some of their things in it. I was the last to leave as I was running around trying to shut down my computer and be sure I had all of the camera gear I might need. I forgot my boots, but I managed to make it with everything else.

As I was running out the door to catch up with the three of them, I grabbed my bridal bouquet on the way out. I attached it to my backpack and took off running down one hill and up another in an attempt to catch up.  As I ran, slipping and sliding on the snowy street, I scooted past John to get close enough to snap this  photograph.  My bouquet dropped off my backpack as I ran past him and I actually ran on a few yards before I realized it had fallen. Running back, I scooped it up and ran on with a camera in one hand and my wedding flowers in the other. I’m sure I was a sight pounding up the hill with a pack on my back and something in each hand.

The Long Walk Out 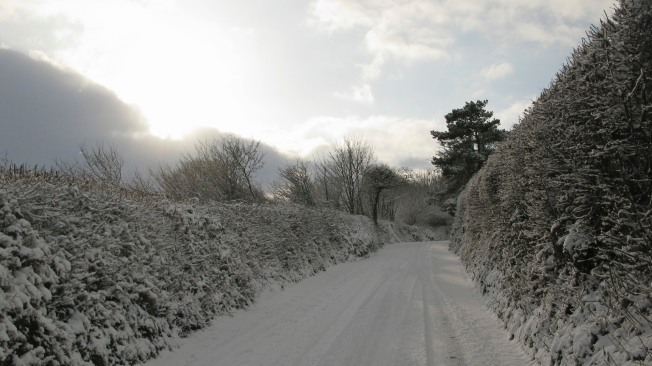 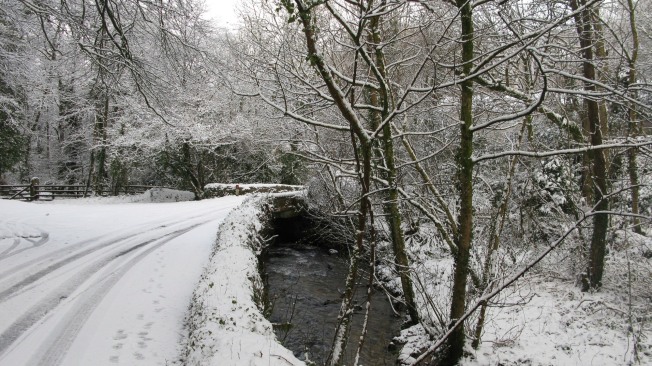 We were on the other side of this bridge heading up yet one more icy hill when an angel in a four wheel drive stopped and offered us a ride to the main road where we were meeting our taxi.  After Matt, (our burly angel) moved a few things around, we all squeezed in and began to make our way through the snow.  A quick phone call gave the taxi driver notice to meet us a bit earlier and on arriving at the drop off point, we had an opportunity to pay back some karmic goodwill by pushing a stuck car out of a drift.

I’m wearing the brown coat with the light blue jeans and John is to my right.  The taxi arrived just after his daughter snapped this photograph as we pushed the car onto the main road.  Once we were in the taxi, I caught this curious look on John’s granddaughter’s face.  I imagine she was thinking, ” What is with this woman and that camera!”

I’ll leave you here now with us all packed into a taxi hoping that we can make it to the closest train station.  Come back tomorrow if  you’d like to join us for the next leg of our journey.