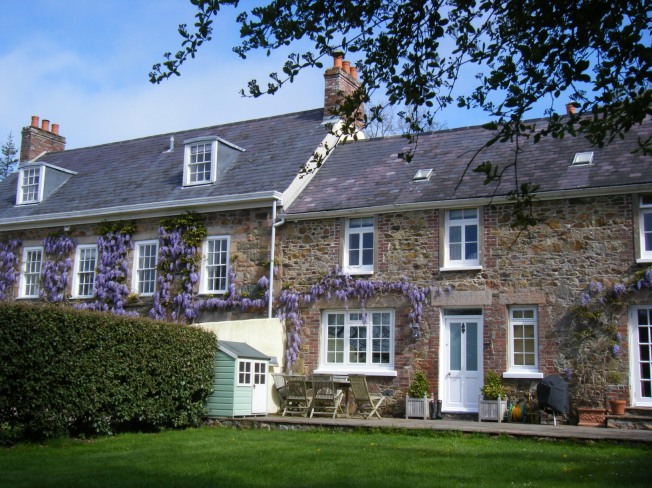 This is the enchanting home we stayed in while John and I were visiting his daughter and her family in Jersey. The house on the other side as well as this one are typical of the 18th century granite farmhouses found in Jersey. Aside from its obvious beauty…there were a few things I didn’t know about homes like this one that I’d like to share with you.

Originally know as the Dower House,  the one pictured above would have provided a home for a woman after the death of her husband. The main house that you see on the left in the first photo would have gone to the heir and the dowager would have moved into the dower house. There have been a few exterior changes to their home with the addition of the french doors and a large kitchen window that provides a beautiful view of their garden. One thing that remains the same is the inscription on the stone above the doorway. Marriage stones are usually found on the southern side of the house and have the husband and wife’s initials along with a heart and the wedding date inscribed into them.

Sometimes though, the date is not a wedding date, but rather some other significant date for the couple. Or a stone might have been added when alterations were made to the building.

The house on the other side is a bit older with a date of 1753 on the marriage stone above the doorway. I don’t have a picture of it, but to help put it into perspective I thought you might  look here to see some of the historic events that occured in 1753.

One thought on “House Of Love”