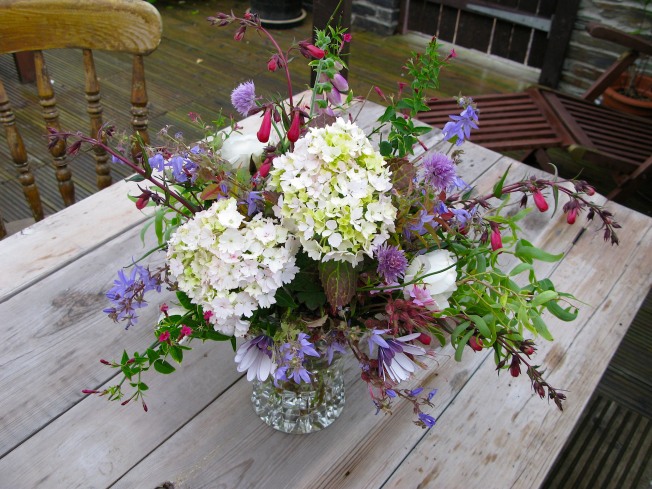 Flowers From Our Garden & Empty Chairs

This weekend has ended much differently than it began and I don’t quite know what to say except I may be away for a few days. John and I are safe, but someone very near to him is not. Yesterday, after staying behind to make sure everything would be ready for a family gathering and a barbecue at home, I received a call from John letting me know what little he knew and that he was on his way to the emergency room at a local hospital. He had so little information initially that it seemed as if everything might be all right so I stayed calm and continued on with the preparations holding on to the idea that it would all turn out to be just an exciting story told around the dinner table later that evening.

Once he saw the doctor it became clear that everything had changed. As the family gathered at the hospital and later the bedside, I lit the charcoal fire and carried on. The rain that had been threatening our garden party and outdoor supper seemed suddenly unimportant as it rolled in soaking the area I’d worked on earlier to make functional and welcoming.

At home alone with no car, I did what I’ve seen women in my family do in these situations, I cooked. I had piles of food waiting to be grilled for our supper so I rummaged in the garage looking everywhere for the charcoal briquettes John had mentioned were there only to find them sitting in plain sight and right in front of me overlooked by my distracted mind.

Moving the grill to the outside edge of the garage, I cooked under the overhang of the garage door so the rain wouldn’t wet the fire that I struggled to create. My little fire flamed and gave off a good bit of smoke as I stood moving the sausages and burgers around the grill… alone in the rain. I thought of John at the hospital waiting and when bits of smoke hit me full in the face, I teared up until I couldn’t tell if it was from smoke or sadness. All I could think of was love and loss and how the lyrics to “Smoke Gets In Your Eyes” would forever have a new meaning for me.

Our dinner party guests arrived with John late in the evening… minus one.  As they sat down to the food I’d kept warming in the oven, they ate and talked carefully around some things such as next steps and “how long” while openly laughing at some of stories they shared …stories that connect them through their common history and blood ties.  New to this family… I could only listen and serve…glad to have an activity to take my mind off how differently the day had begun and the “what ifs”  that I’d been trying to push away all afternoon as I struggled to make sense of the events of the day.

There is little now we can do but wait.  The doctors have given no hope of recovery and have said it’s just a matter of time. While the staff at the hospital focus on a painless transition for this much loved family member, I’ll focus on the care and comfort of those who are now a part my family.

I may be away for a few days, but I’ll be back.