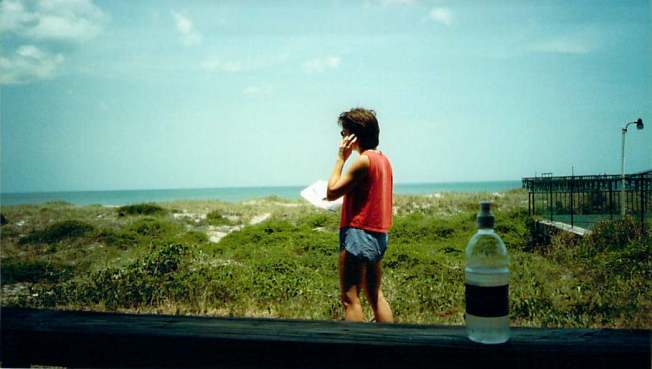 “How could you serve me with divorce papers when I told you I just wanted time away to think?”

Josie took a deep breath after she said this keeping her tone even and her voice calm an action that took all of her control when what she really wanted was to scream. She wished she’d gone back inside to take the call from Paul instead of staying where she’d been standing while watching the beach. As he began again to list all the same old things she could never seem get right, she found herself tuning out the sound of his voice as she watched a family setting up their umbrella chairs just past the sand dunes near the water.

She wished for a moment that she could be back here again with Paul the first time they’d seen the beach house. Everything had seemed possible then when things were new and love seemed like it would last forever. Josie had wanted a family with this man, children like the two she saw on the beach squirming and giggling as their mom tried to spread sunscreen over them. She watched the woman rubbing what looked like Coppertone on the little girls thinking perhaps she might actually be able to protect them from the damaging rays of the hot Florida sun. Josie knew she was writing a script for the young mother based on her own fears. She too had once believed that protection from skin cancer could be had for a few dollars in a tube of zinc based cream. It wasn’t until her doctor had said melanoma that she’d stopped believing the marketing hype. She’d never liked Florida before, not even as a kid when she’d gone to Disney World the summer she turned twelve, but there was something different about this place. This sliver of island off the eastern coast of Florida was far enough north to see the seasons change and some of the older houses built years before even had fireplaces, something you didn’t see anymore since the laws had changed and people worried more about clean air.

Watching the children chase the waves that rolled up on the beach, she smiled as the older girl slipped past the reach of her younger sister squealing with the delight of the victorious in a game of tag. Josie forgot for a minute what Paul at been saying and the anger in his voice. She thought instead about this place, this piece of beach where she’d fallen in love with the mismatched round stepping stones on a path between the grassy dunes in front of the beach house. Weathered and grey made from some pebbly mixture, it was the stones that had sealed it for her. Right from the beginning there had been something magical about the odd spacing of the stones that stretched across the sand. Laid out by someone with a longer gait, the distance between them made it so she almost had to leap slightly like a child skipping from stone to stone, dancing in a way through the dunes to the beach.

Remembering all this, she let the divorce papers she’d been holding slip from her hand as she dropped the phone into sand at her feet. She thought for second she heard Paul’s voice calling out to her from somewhere …just before she stepped out of her shoes and onto the path, leaping as she went from stone to stone on her way back down to the water’s edge.

Thanks to Red Pine Mountain for her opening sentence that I used to do this bit of practice writing for the first TMAST .

After you read this, please go here to leave a sentence for next weeks challenge and perhaps some of you will join me by writing one yourself and posting it on your blog on Tuesday. It you let me know you’ve posted a piece for TMAST, (Tell Me A Story Tuesday) I’ll link to it here with my story. Thank you to everyone who left a comment last week over at the TMAST site. I really enjoyed reading them and had a difficult time deciding which to use today.