Our friend MIJ is desperately ill. She won’t get any better and it is really bad now. That knowledge sits so uneasily with me that it stays with me in the back of everything lately. I pester John for answers he doesn’t have and ask him to call her partner Ray for updates when I know there is not going to be any good news.

Twenty years ago, MIJ had breast cancer with a reoccurrence five years later, but with good medical intervention and diligent followups it seemed unlikely that this would reenter her life, at least not in this way. In November, she turned sixty with the kind of energy you would expect to see in an athletic forty year old. As active as I am, I always felt pleasantly tired after one of our five hour walks around Dartmoor, while MIJ never showed any signs of fatigue.

She has been in so much pain that Ray said she has given up and her doctors are now focused on just keeping her as comfortable as possible. Already a tiny slip of a woman, her weight loss is shocking when friends stop by to see her and it has been difficult to find the right dosage between controlling the pain and allowing her some lucidity in the short time she has left.

From everything we hear, she is receiving wonderful care from a compassionate medical team who spent weeks searching diligently through symptoms that were so unusual that they thought she might have something they could treat … something with a different outcome than the one she has now, a terminal diagnosis.

Mid November was the last time we saw her. I wish I had known it would be our last walk, I might have talked of other things. From all appearances, everything in her life was fine. She’d just had her sixtieth birthday becoming eligible for her state pension and we discussed the ways a bit of extra cash would be useful to her travel plans. After retiring at 58, she and Ray would often go off for six weeks at a time, walking and camping in conditions that while beautiful, would have left me grumbling. When we saw them in November, they were planning a trip to Nepal with a departure date of next month, and I listened to her explanation of why they were going there and putting off the New Zealand trip I knew she had been dreaming about.

She also told me in great detail of the new kitchen installation she had decided to go ahead with. MIJ has a doll house of a cottage and had wanted to make changes for some time, but had put it off, concerned as are most people on the edge of retirement, about money. The kitchen was finished about a week after MIJ went into the hospital. She never even had a chance to use it. My mind fixates on things like that. I tend to get stuck on thoughts such how she won’t ever cook a meal or wash a dish in the new space. I think about how she will never see New Zealand or swim again with her grandchildren. I keep thinking about how sad it all is and what she will miss.

I have been getting stuck there lately thinking about the twenty years she won’t have, but John encourages me to shift my thinking by gently reminding me of the twenty years of living she has been able to have since her first cancer diagnosis. In those years, MIJ has seen her son marry and have children of his own and she has been able build memorable relationships with her grandchildren who are old enough now to remember her when she is gone. Having twenty more years meant she had time to meet and fall in love with Ray eighteen years ago and travel to places she might never have seen had she been traveling alone.

When I came back from America early in December, I anticipated we would see Ray and MIJ for New Year’s Eve like we did last year, but around the time I began to think we should call them to make a plan, Ray called us to share the bad news. They were with us on our wedding day and I thought we would have more time. That’s often the way it is. You plan for a future that may not come and put off the things you might do or say differently if you only knew that this moment might be all you would have.

It is so natural to say, ” When I retire, I shall do ____ or when I get a new ___, I’ll be peaceful and happy,”  but if anything ever illustrated the point that we should not wait to do the things that matter, the finality of death does in it in an unmistakable way. It is that period at the end of the sentence, the full on stop that says, ” Your time is up.”

As Ray watches over MIJ in the hospital, I find my focus shifting to what we can do to help him. MIJ is getting all she needs now and is barely able to communicate more than a few words a day. He is at her side, all hours of the day, staying late into the night to keep her company as she gets ready for the final part of her journey.

Looking back over my photographs from our last walk together, I saved this one although I wasn’t really sure why at the time. It is not particularly pretty like many of the others that day, but in looking at it now I can see a future that was not apparent to any of us three short months ago.

MIJ, as you can see, walks on ahead while Ray waits, looking off in another direction. She is getting closer to the end now and I feel such sorrow thinking of her dying in a hospital bed. A still and quiet MIJ is so unfamiliar that I can’t quite get my head around it and my mind looks for something more comforting. I find it by picturing her walking, looking as I remember her best and thinking of these last days as measured steps, where MIJ is only going on before us, on a last walk alone. 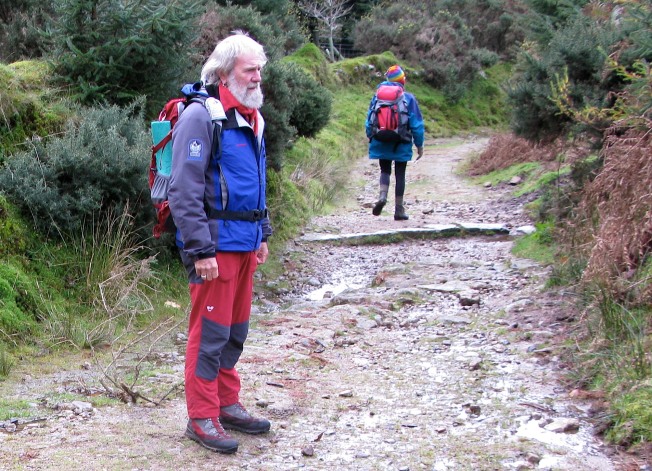