Last night I emailed the image below from Target, to my husband John.

Some of you may remember that our original building plans for the the extension also included adding an en-suite bath for the master bedroom. 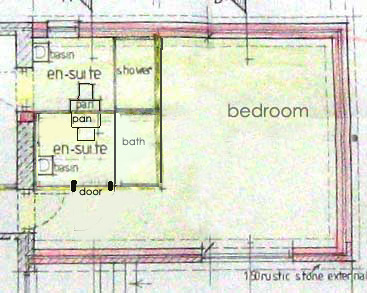 Adding the bath meant that we had to steal a few feet from the master bedroom for a corridor leading to my space. Along with the extension, the master bedroom got a new look as well and part of that involved new bedroom furniture. While we did not have to do such a major renovation or build out, this space has gone through a fair amount of change as well. Part of that change involved redecorating. We are down to just one or two changes in the master before it’s complete and the bedside tables are a topic of conversation lately.

Since John is so good with building things, we have talked about how he might build the bedside tables and occasionally, as I have about 599 times over the last nine months, I’ve emailed him examples of things I like from the internet. Some of my favorite resource sites during the renovation have been places like, Young House Love, Design Sponge, and the always inspiring, Poppytalk. In addition, Design Therapy, Bloom Studio, and Apartment Therapy gave me tons of ideas as I was planning my space.

Last night as John was checking his email, I heard him say, ‘You must be joking!’ I knew when I heard him that he was talking about the bedside table and went to his study in time to hear him say, ‘I can’t make that!’ Of course, I had not really expected him to make it, but was only sending him another in a long series of images that had caught my eye.

Now to fully explain the title for this post … a few weeks ago, John ordered a pulley with the intention of hauling a five and half foot unvented hot water tank up into the attic (loft) to provide hot water to the two new en-suites. When he suggested that he and I could lift it up through the smallish opening for the attic space using the pulley, I thought to myself that it might be a difficult task, but being my father’s daughter and having never shirked from heavy lifting, I thought we would manage, especially when John said our next door neighbor would help if necessary.

A few days after that conversation, I came down the corridor from my studio and noticed the attic door was open and the pull-down stairs pushed way back out of the way. When I saw that I knew immediately that something was up and up it certainly was. It seems while I had busied myself with something out of hearing range, the pulley had been delivered and John had used it to hoist the cumbersome tank all by himself. I was both shocked and impressed to find I had been living all this time with … Superman! That man continues to amaze me.

4 thoughts on “I Married Superman”