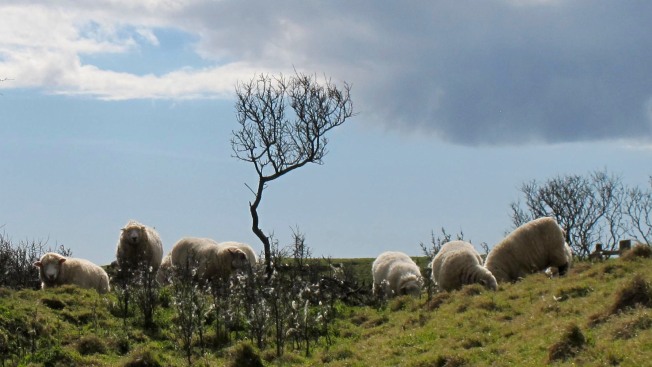 John and I set off yesterday on a coast path walk that was new ground for us. While we’d been to Polperro in the past, we had not walked the path we took yesterday. This shot reminded me of a trip I took the summer of my 20th year to the dusty Greek island of Ios. The lone tree with all the sheep around it took me straight back in time except it was cooler here and green, with the only dust being that our feet kicked up in a few well worn places when we picked up the path later.

It’s always easy to spot when you’re in an area where you may run into sheep. Walking the coast path can sometimes take you through farmers fields and while you are free to walk on the designated path, you must be very careful not to do anything that scares the sheep if you stray off it. Dogs have to stay on a leash and there can be serious repercussions if a farmer catches a dog chasing the sheep. 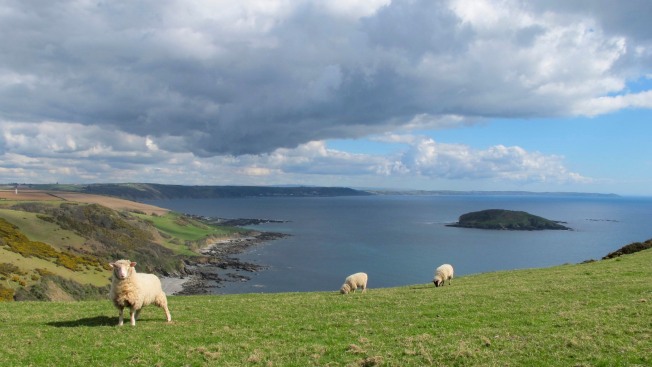 Sometimes following John can mean diverting from the path … ‘ Don’t mind us,’ I tell the sheep as we walk right through their seaside café.

He can often get ahead of me when I linger to take … ‘ Just one more photo ‘ an expression he’s heard me use many times since we met. You can see John in the distance if you look to the right.

Here’s another shot of John that I took while running to catch up. 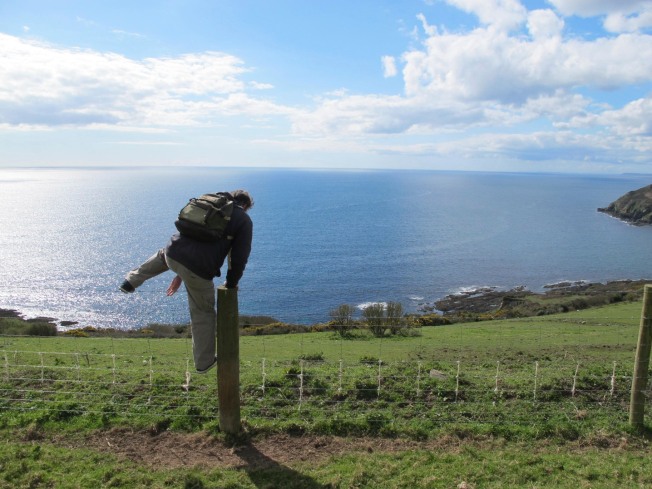 Because we were walking through a field, we had to hop a fence or two to get back on the coast path … John went first.

Then I showed him my technique for climbing over barbed wire fences. 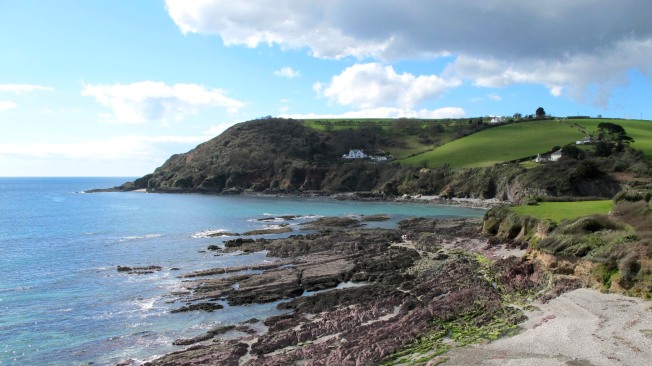 Not long after, we walked into this lovely space as we came down the coast path. 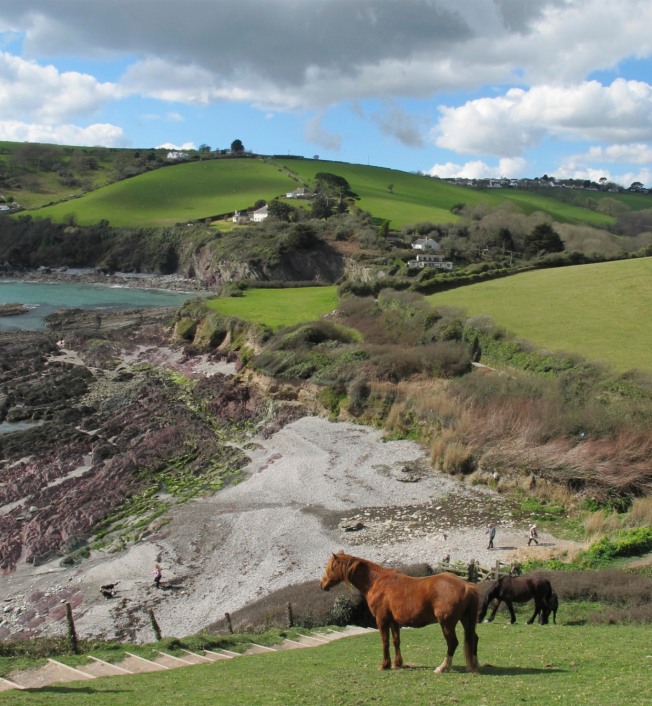 I stopped to touch the nose of the chestnut colored horse on the way down to the beach.

Before I went down, I turned back to photograph the horse on the hill. I liked the balance in the space between the horse and the tree. 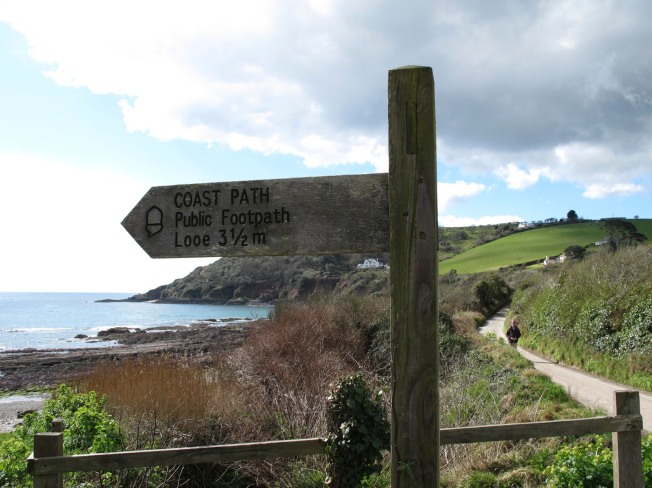 There’s John off to the right … waiting for me, again.

This is one of my favorite shots of the day. I loved the lines in this photograph … that’s John enjoying the view for a minute before continuing on into Polperro.

Polperro is one of my favorite fishing villages in Cornwall and is different from others in a few ways I’ll come back to in another post.

We walked into the village next to the harbor coming from the direction near the tip of the trees you see slightly off-center in this photograph. You climb up and down a lot of hills on the path to Polperro. 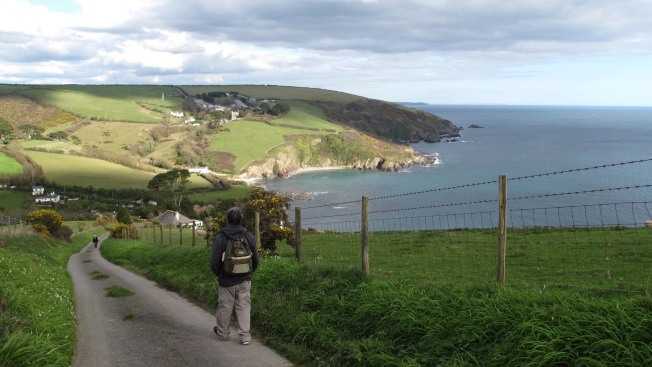 We were halfway back to where we started by the time we reached this spot. Our goal was a visit to the Talland Church on the hill before going on to where we left the car. From here it didn’t look as if we had far to go, but as anyone who drives through the lanes here will tell you, a quick trip can take longer than you think and even more so when you are walking rather than driving through the lanes. 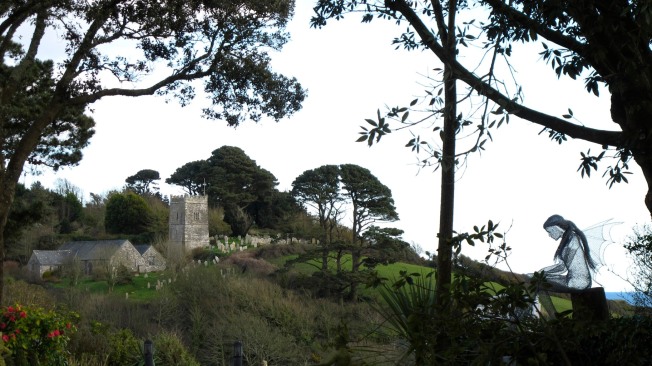 I was in a hurry to get to the church before the sun changed too dramatically as I was worried about losing the light. We took a wrong turn that carried us right past this view and I loved the way I was able to show the church and the fairy balanced in the same shot.

After a few more hills we reached our destination, although not our final one of the day.

The church was locked which is generally not the case with village churches at least during the day, but we didn’t mind so much after finding a well placed bench with a view of the sea.