There are times when I’m fortunate to be standing in just the right place to see and capture a moment that touches my heart. On Saturday I got a bit teary watching my friend, Julie greet her daughter, Evie as she arrived at the spot where we’d been waiting to cheer her on. Fifteen year-old Evie was one the special folks chosen to carry the Olympic flame through Cornwall and she did her family proud in her role as an Olympic Torchbearer.

The Olympic flame will pass through quite a few more hands before reaching London in time for the 2012 opening ceremony in 67 days and while I won’t be able to see any of the events live as I’ll be in the US for most of the Olympics, I won’t forget watching Evie run or the tender mother-daughter embrace on Evie’s big day.

I managed to get a few shots of Evie posing for pictures while she waited for the torchbearer before her, (#105) to arrive with the flame. You can see her with her torch as it looked before the big kiss … (the moment the flame is passed is called a kiss.) 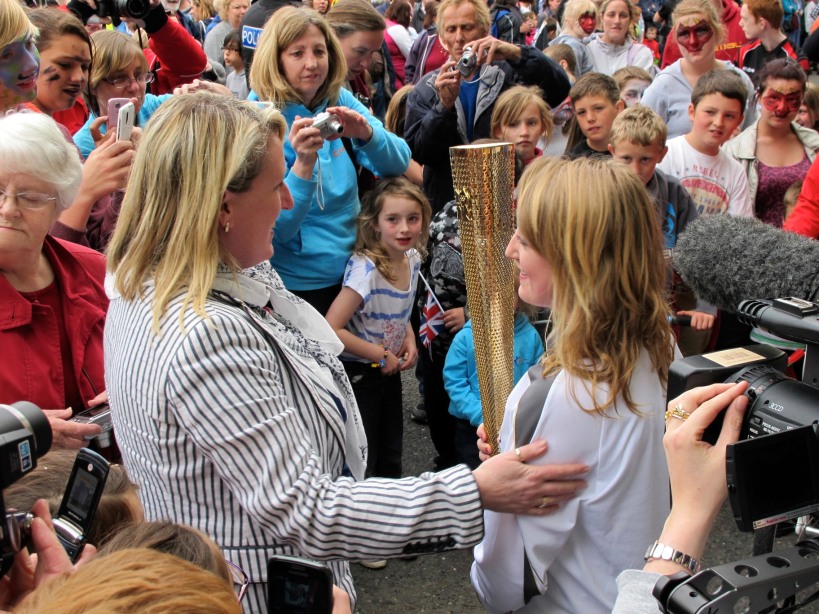 I’ve lifted a bit of Evie’s nomination story from the Torchbearers site so you can read more about her, but let me just say having run along side her through the crowds yesterday with her dad, brother, and loads of other people all trying to get a photo, I learned that  … Speedy Evie Fairman can really run! 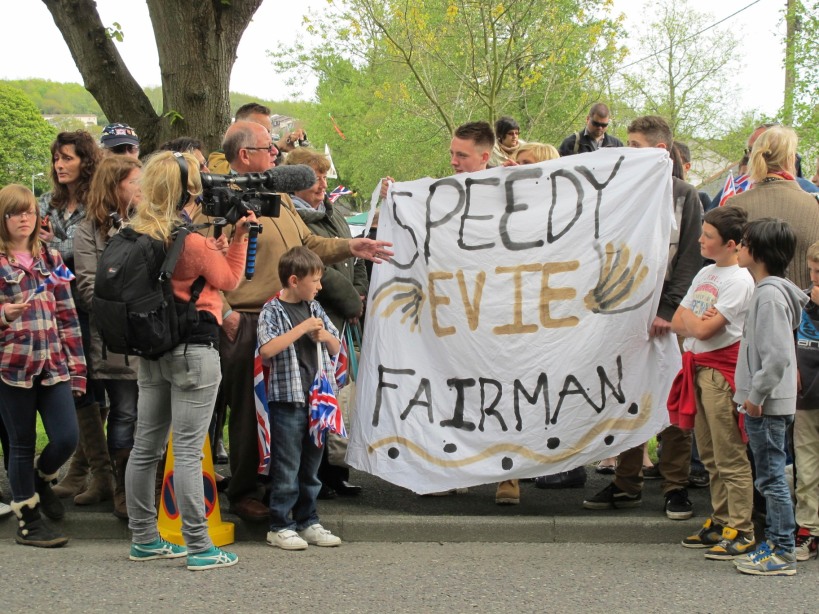 “Although Evie was born with only half a working heart (Hypoplastic Left Heart Syndrome), she has always lived life to the full. From playing football and taking part in the Duke of Edinburgh Scheme to singing in the school choir and performing in musicals, she takes everything in her stride. She is an active member of the Youth Council of ‘Little Hearts Matter’, a national charity set up to provide support and information for children with single ventricular heart problems and their families, as well as raise awareness of the conditions and the care and attention these children need. As part of her Youth Council work, Evie spends a lot of her time mentoring other younger members, giving them advice and a chance to discuss their anxieties. By participating in major fund raising efforts and writing to celebrities for their help, she also works hard to help raise awareness which will only lead to more heart babies being treated swiftly soon after birth. Recently the City of Birmingham (where the charity’s offices are situated) recognised the extraordinary efforts of the Youth Council by giving each member the Freedom of the City. Evie may only have half a heart but she uses it to the full. She is an inspiration to all who come into contact with her and I feel honoured to be one of them.”  (Evie was nominated by one of her teachers at school)

Evie with her brother, Fred and her mom, Julie. (Sorry about the focus) 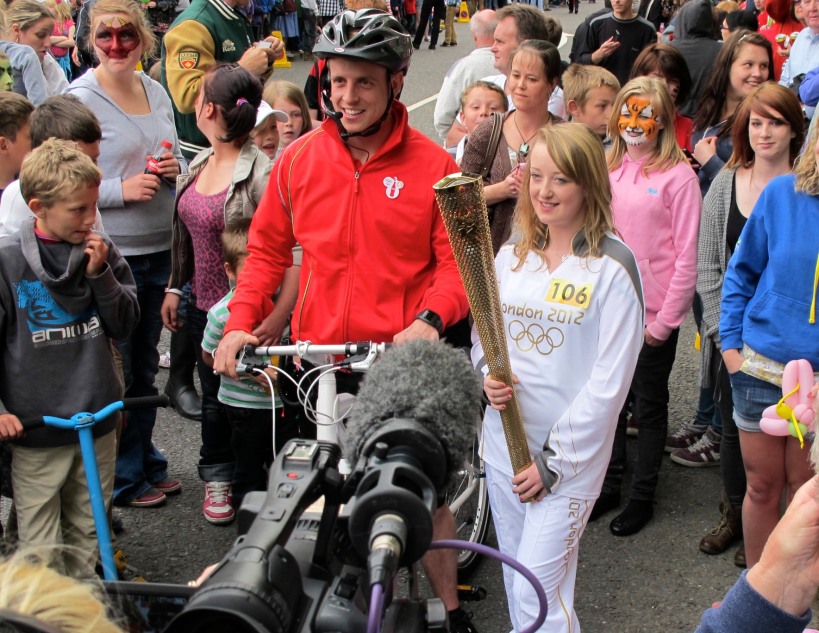 She posed for photos like a red carpet veteran. 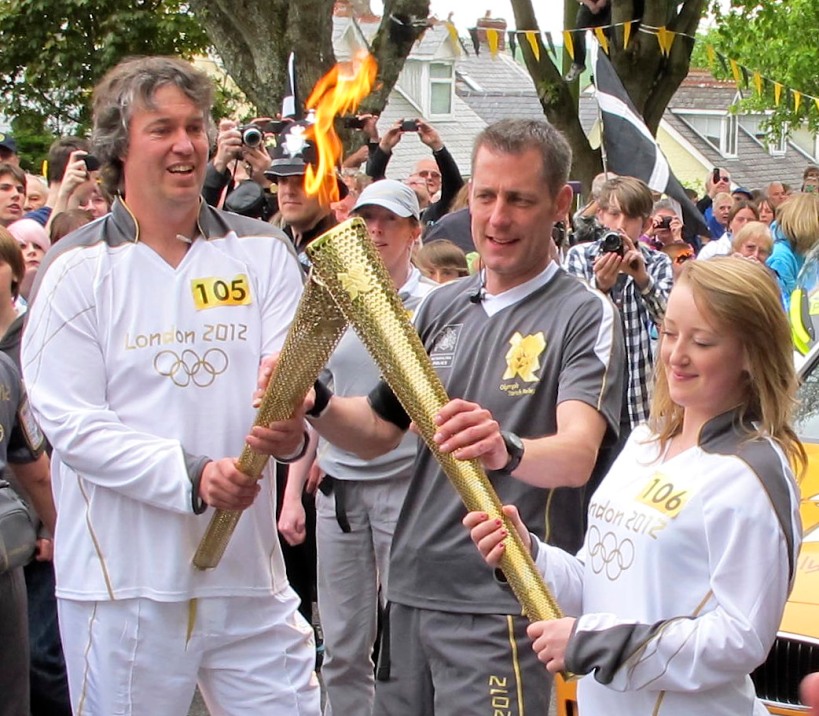 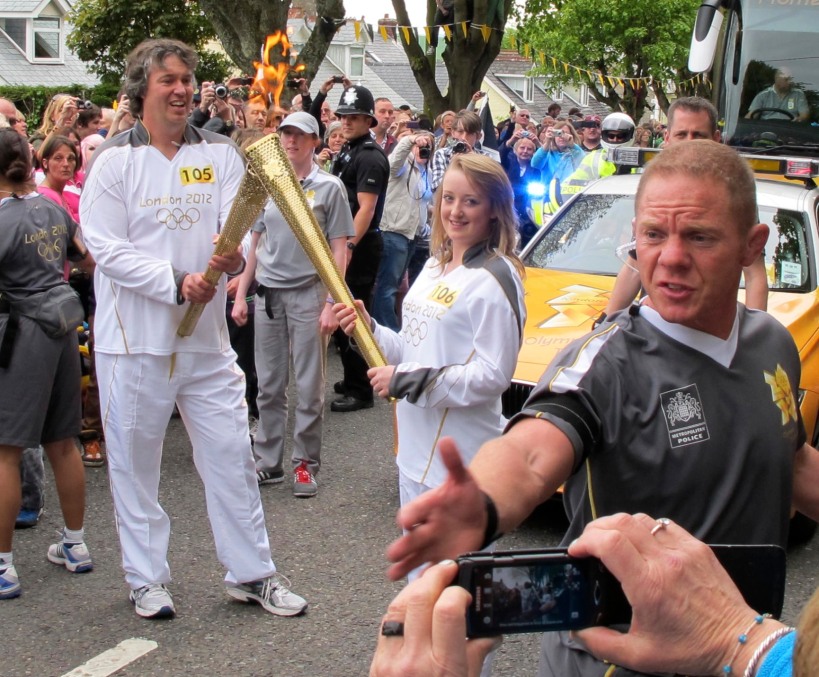 I love the look on her face in this shot and the energy of the crowd scrambling to get a photograph. There were people in trees and hanging out of windows along the way.

This one looks as if she’s getting some last-minute advice before she takes off.

Security was tight with loads of police officers along the route.

In addition to the police, Evie had Olympic escorts who ran with her and kept the crowd from getting in her way. She was just about to begin running in this photograph. Notice the van in front with the camera crew in the back. There was point when the van driver had to speed up because Evie was running so fast. 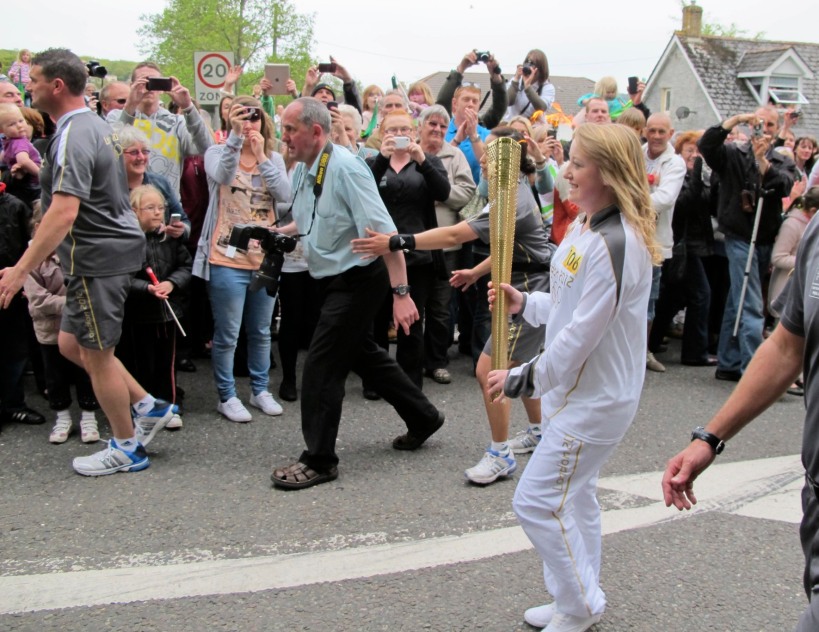 And then she was off! 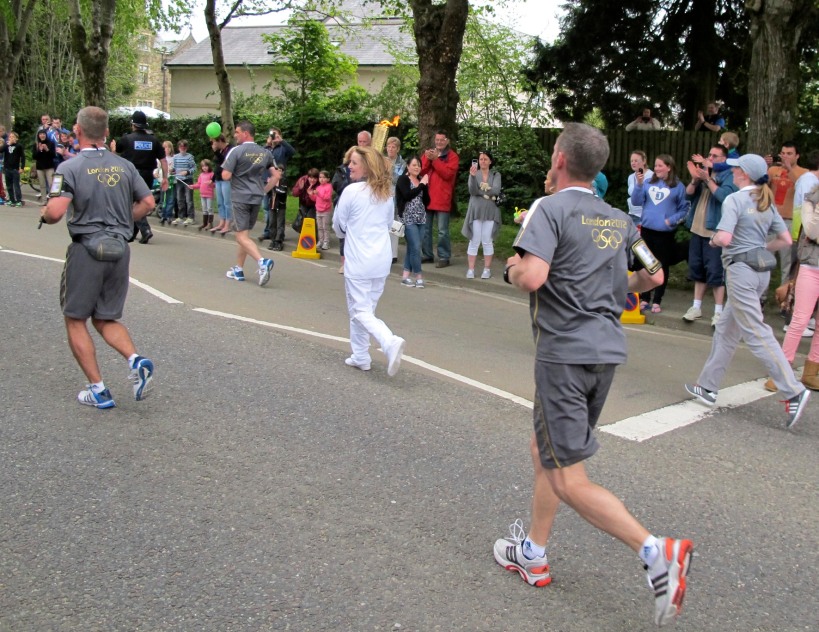 I was running along with her dad, Ben while he was trying to hang on to her brother, Fred and shoot video at the same time. People were running all around us so it was a bit hectic, but very exciting. 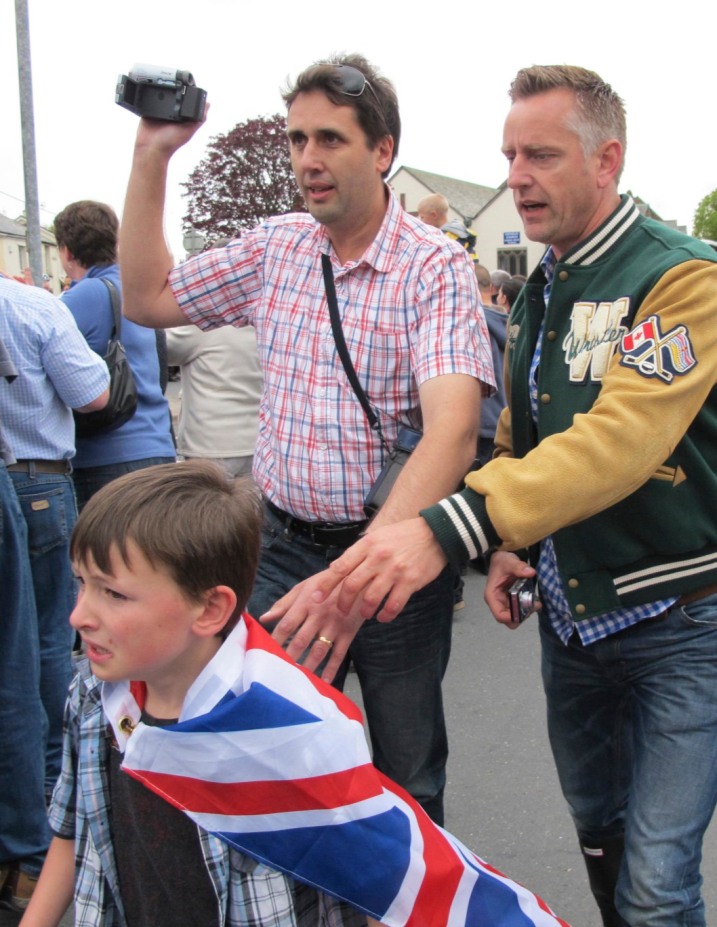 I stopped briefly for the dog shot below. It had come off its leash somehow and was frightened by all the bodies running past. I was going to try to help catch it, but the dog’s owner grabbed it right after I took the photo. 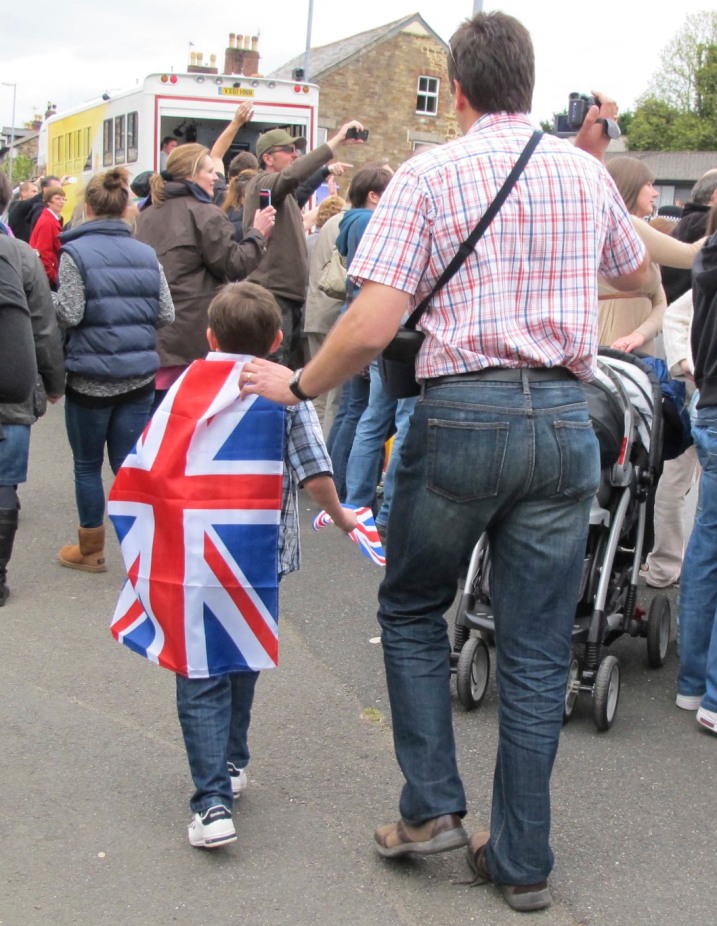 I got behind them after slowing down for the dogs and it was about here that I realized my friend Nicola Mitchell was there too when I saw her just above Fred’s head. She’s holding the cell photo with the pink stripe around it.

Fred couldn’t see a thing as was the case with me in the next minute and then he was lifted up for a better view. This was the moment where Evie passed the flame on to the next torchbearer, but I couldn’t get a shot of it. You can see the flame and torch just behind the police officer’s head.

On the far right you can see the last bit of the flame. Evie’s dad, Ben is right in front of me with the video camera and her brother, Fred has the best view of the exchange.

The was a party afterwards at the pub with family and friends making a great finish to a fun afternoon and evening. Well done, Evie!