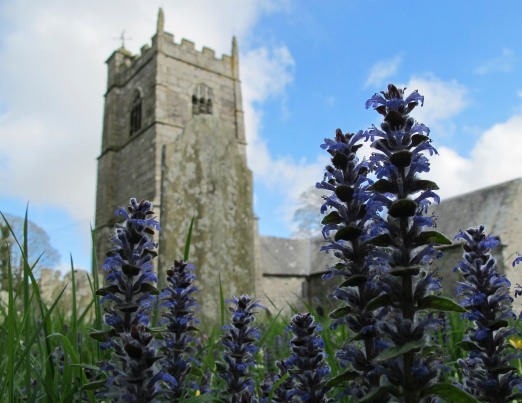 Most of my friends and family know of my fascination with photographing old churchyards and cemeteries. I can get lost in a one for hours if left alone and I was delighted when I first came to Cornwall to find John living in a village with a lovely church only a short walk from home.

Since marrying him and moving to the UK, I’ve spent a lot of time in the churchyard especially when I felt a need for a quiet moment, not that it’s very busy or noisy in our village of 500. It’s a peaceful spot to watch the birds fly in and out of the church tower or to photograph the seasons as they change and I used to stop there for a rest at the end of a run. Even though my runs have become more of run/walk in the last few years, I still like to have a look around when I’m passing by.

I am always interested in photographing the gravestones, especially the old ones, and I notice when I spot an unusual name. The gravestone below first caught my eye because it is next to one (not in the picture) that has Elizabeth on it. I know it may sound strange, but I always look for headstones with John and Elizabeth lying next to each other. Click here to see a post about a churchyard over looking the sea where I posted some gorgeous photos and wrote more about how we always seem to find our names together.

Like any small community, you can discover a lot about its history through the names on the gravestones. Unusual names like, Axworthy tend to make me head for my computer pretty quickly to see what I can learn, but I have to admit that until I met a member of the Axworthy family last Sunday, I had not followed up on the research.

Last Sunday was Mother’s Day in the UK and I had the pleasure of meeting a woman who was born in the cottage which use to house the old post office for our village. She moved away when she was seven, but still comes back a few times a year to have a bit of lunch and a look around the village. I recognized her maiden name right away when she told me because Axworthy is one of the more interesting names in the churchyard. She was in the pub with her son and daughter-in-law who told me she still lived in a village nearby.

After she told me her name and where she had been born, her son mentioned that there was a photo on the wall in another  room of the pub that had some of their relatives in it. I went around ‘borrowed’ it and after talking about the men in the photograph, I asked her permission to take a picture of her holding a copy of the photo of her great-grandfather, Austin Axworthy and great-uncle, Edgar Axworthy. 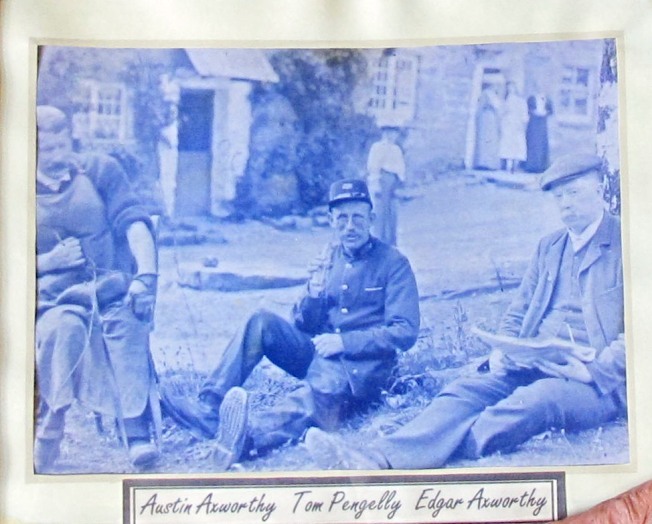 They are sitting in front of the cottage/post office where she was born in 1926. While I don’t think there are Axworthy’s in our village anymore, there are certainly Pengelly’s living here. Tom Pengelly was the postman according the family.

I was pleased to meet such a delightful woman with a history and link to this place that has become my home and I was happy that she and her family gave me permission to use the photo and share our meeting online.

The stone cottage she was born in has changed a lot over the years. You can just see the edge of it where the women are standing in the doorway in the photo above.

In this old black and white photograph provided by Shirley Runnells, the cottage that housed the old post office is on the right side with the phone box near the doorway. With a family living upstairs, I can’t imagine there was much privacy when trying to use the phone. The two cottages attached to it were later joined to form one.

I took this photo taken last week and while you can’t see it, there is a window behind the blue car that used to be the doorway to the middle cottage. I am not sure when the two became one, but the old post office was housed in the white cottage until 1999. 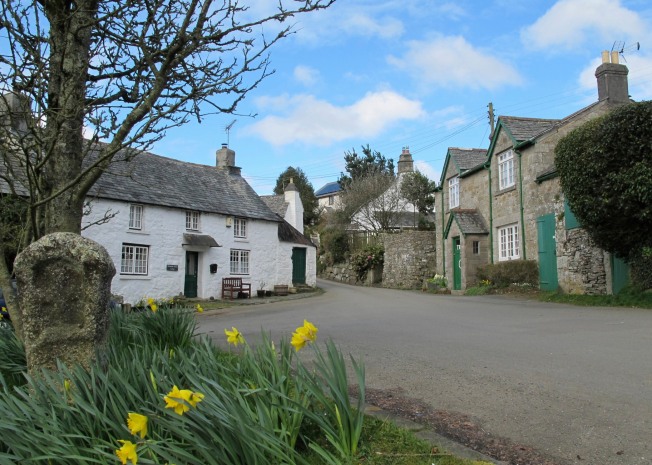 The stone cottage across from it is the ‘Old Smithy.’ I am not sure why we still call it that when we don’t have another blacksmith in the village.

When I researched the Axworthy name, I confirmed that it was Saxon in origin, something John had already told me, and the earliest recording of it in writing was during the reign of Henry VIII when Harry Axworthy was christened in 1542 in Lezant, Cornwall.

It might be easy for some to take the history of a place for granted, but in a country where you don’t have to go far to see something like the Celtic cross which marks the intersection of two lanes on the left in this photo, it’s difficult not to occasionally imagine the ghosts of those who lived here before me.

Talking with the great-granddaughter and great-great-grandson of the man in the photograph may have answered a few questions, but the real gift was more of a day-dreamy one as I imagined the lady before me as a baby and young girl learning to walk the same paths I’ve come to love in the village where we live.

Have you ever had an accidental meeting of a similar sort?