It can’t really be possible that it’s almost time for her to go … didn’t we just pick her up at the airport the other day? I still have a million things I want to show her and things I want to say. I know I’ll see her in July when I go back to Georgia for a few weeks, but I want to teach her how to make pasties while she’s here and have time for her to teach me how to knit again while sitting side by side in my studio space. I want to see her feeding the wild ponies too many sugar cubes on Bodmin Moor and take her picture on Jubilee Rock and Helland Bridge. I want to have enough time to ride bikes along the Camel Trail and walk with her through the buttercup field and show her how magical the bluebells look lining the hills of Lavethan Wood. I just want more time …

I wanted this so bad I could taste it, but the winner of the 2010 Pasty Contest was…

… not me! The winning pasty was made by Rebecca, the woman you see above. I have to admit her Scotch egg pasty was spicy and delicious and as you can see below, beautifully made. 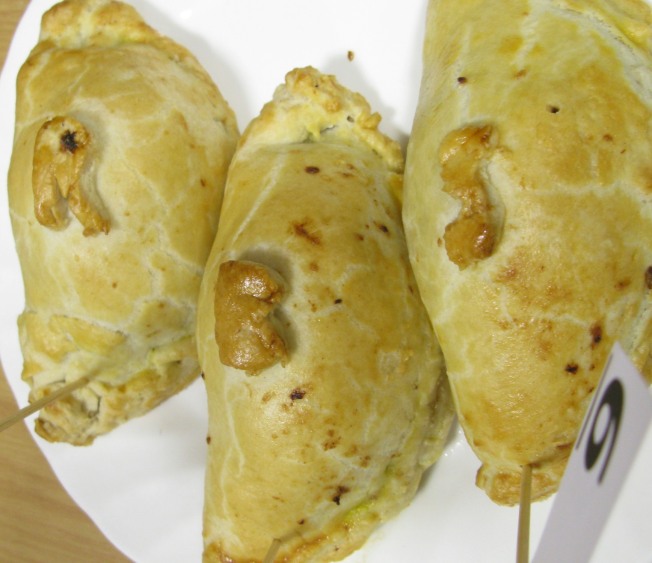 Competition was fierce among 21 contestants and while I scored a respectable 120 points, the winning numbers were 139, 134, and 129. Second place was captured by Pauline who rushed in late and whipped up a Pigeon pasty that earned her a spot in the winners circle. 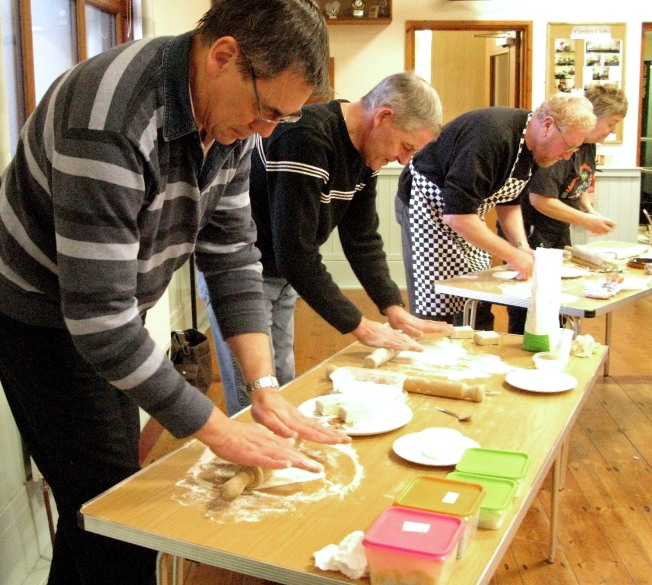 Robert and Ian, who made their pasties on the same table tied for third. Robert, who you see closest to you is rolling out the pastry for what will be his stuffed to the max haggis and potato pasty while Ian is almost ready to begin putting his rabbit pasty together with onions and a bit of mustard sauce. With key ingredients such as rabbit, pigeon, haggis, and scotch egg making up the winning pasties, you might wonder what of some of the others 17 varieties of pasties contained. 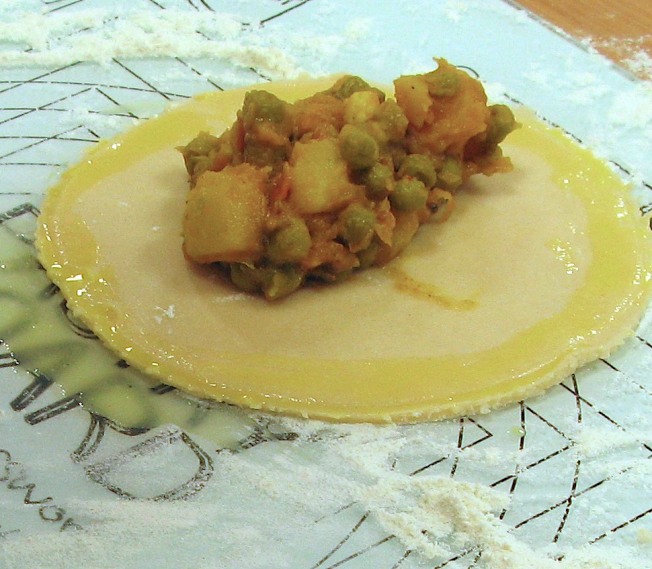 There were several versions of spicy indian mixtures along with lamb, beef, and chicken. A Christmas pudding pasty with cheese and chillies along with several fish pasties added options for snacking and included Helen’s smoked halibut, cod, and asparagus combination which looked really yummy. Several contained breakfast ingredients that included baked beans and black pudding. I must admit that I gave those a miss. I can’t yet get my taste buds around black pudding no matter how good people say it is.

That’s Len’s pasty ready for the fold over, but first …

…  he decided he needed a quick break below …

… for some liquid refreshment leaving his wife Mary hard at work on her own above.

We made pasties in shifts at the tables while others strolled around offering praise or advice while checking out the competition. 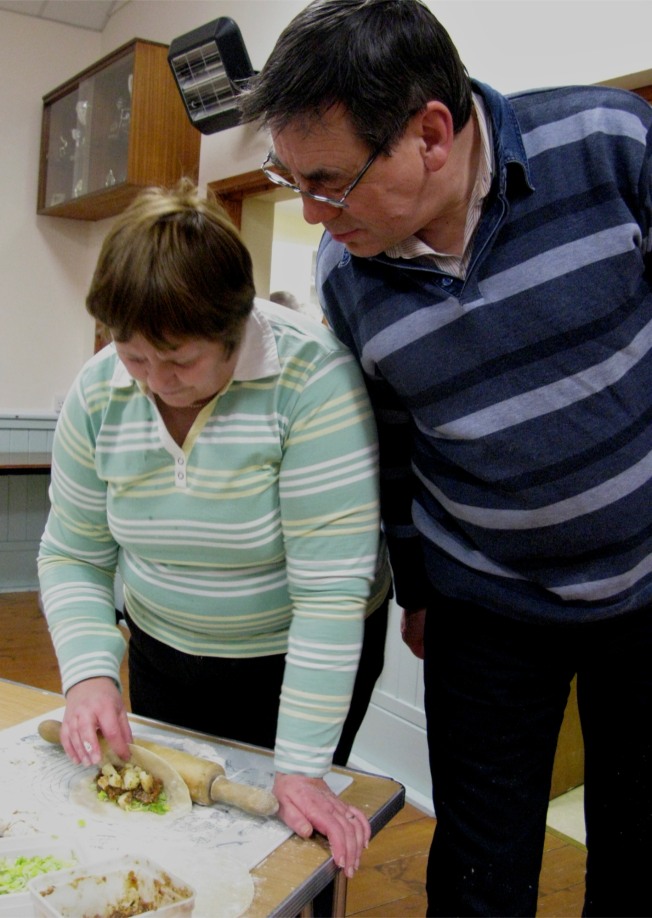 Robert gives his wife Jean’s ( that’s Jean, who sometimes comments on my blog) pasty technique a good look after putting his entry in the oven.

Next to Jean is Helen, who came up with the pasty-making party idea and did all the work to make it successful right down to making the great looking award you saw Rebecca holding in the photograph above.

That’s me in the apron working next to Kate. She made three pasties while I was still finishing up my first one, but she did say she used to make them in a shop so she’d had a bit of practice. My pasty took a bit longer too because I made something no longer seen in the area, a two course pasty with a sweet on one end.  It was the only two course pasty in the competition and Gary, one of the judges said later that he really liked the sweet part of mine in particular.

A two course pasty requires a little pastry to separate the sweet from the savory. Can you tell what’s inside mine yet? 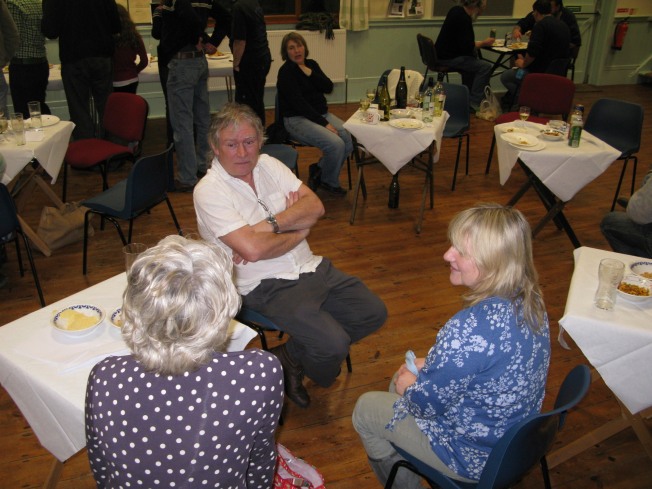 … and then the waiting … 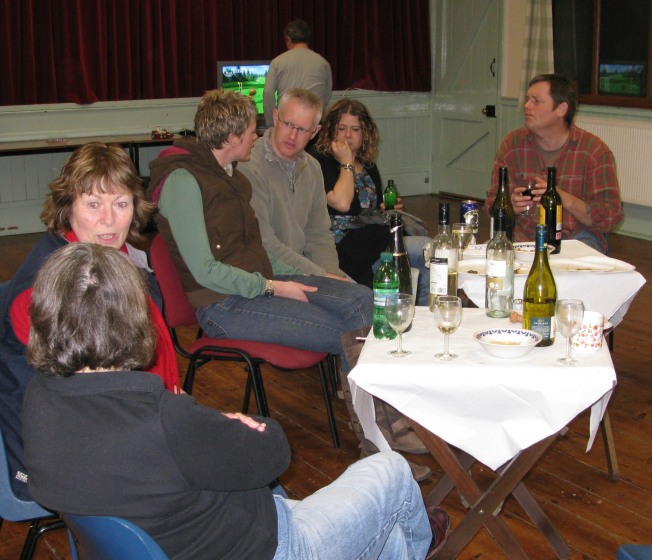 … until it was time for the tasting.

The three judges went first. I need to add here that Gary, David and Griz each ate seven pasties over the course of the evening and the variety of ingredients made some less appealing to me than others so a big well done to all three judges. 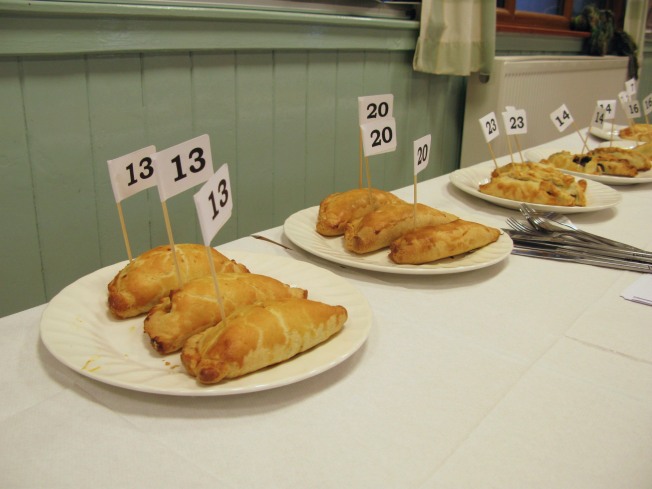 As they came out of the oven, the judges took one pasty from each plate and split it three ways leaving two to be taste tested and judged by the other pasty makers who each had a chance to leave a number and a vote behind. 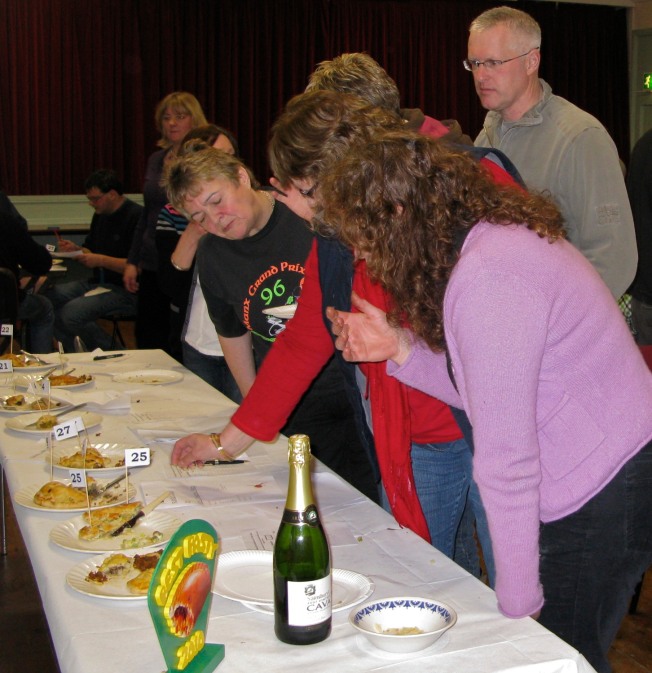 We’ll call it the people’s vote. It was only a small percentage of the total score, but seeing what your plate looked like after the table was rushed by the hungry hoards, did a bit to ease the disappointment of not winning later.

Number three on the end is my pasty sitting next to the scotch egg pasty that won first prize. 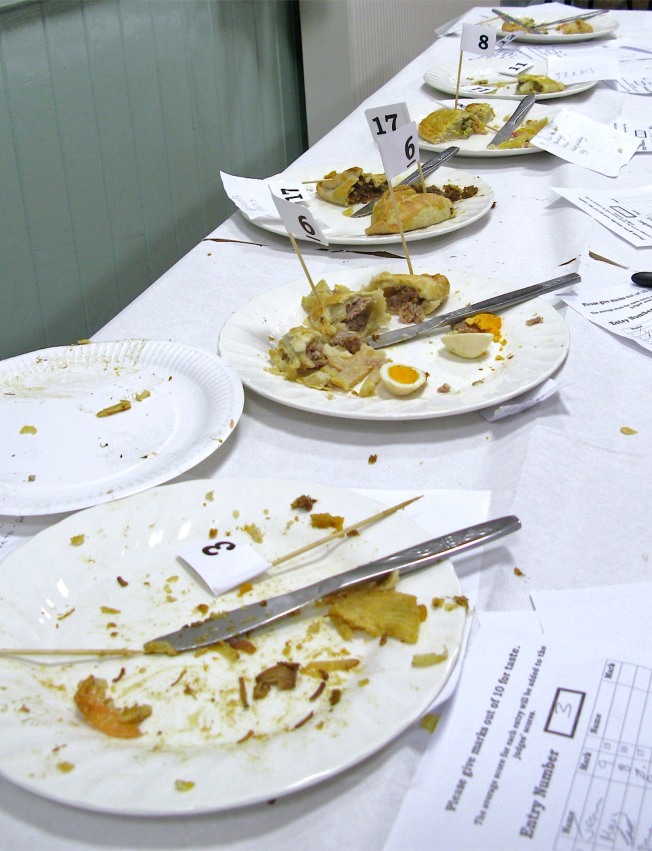 Here is a look at my plate ( number three ) after the other contestants had a taste. So while it’s not a trophy, I think the empty plate reflects public opinion fairly well. Some of us laughed about the competitiveness of Americans, but I think there were a few other people who coveted that trophy as well.

Now down to the nitty gritty, packed inside my Cornish pasty was a decidedly Un-Cornish set of ingredients. It contained a mix perfect for a tailgate party or a 4th of July celebration. With slow cooked pulled pork barbecue, a bit of coleslaw and smattering of cheddar cheese filling the main section, there was also a tiny bit of dessert tucked on the end made from a sweet potato pie mixture that included brown sugar and pecans. It really was pretty yummy or scrummy as one might say here.

Now I need to say that I am really just teasing about being so disappointed in not winning … I had a great time and I learned a lot about making a local dish. In addition to a fun evening there was a fund raising element involved as there so often is at these kind of events. After the small expense of the village hall rental, and a few other things, we had 45 pounds left to donate to Shelter Box, an international disaster relief charity that has it’s headquarters here in Cornwall.

Thanks again to Helen and her partner Ron who did so much work to make the event run smoothly and to the judges Gary, Griz and David.