I’ve read Kyran Pittman’s work for longer than I can remember beginning with her first blog, Notes to Self. I think I found her around 2006 when I discovered there was a community of folks doing something called ‘blogging.’ Her talented husband, Patrick created a logo for me back in 2007 which helped me track time through old emails, but I’d be hard put to come up with an exact date.

All this chatter about memory, dates, and Kyran Pittman is due to a comment I left on her  website, Planting Dandelions a few days ago.

It turns out that in addition to our expat identities as women who married and moved for a love met online, we both collect owls.

I’ve loved owls from childhood when I read a book written by my Aunt Wylly called The Ghost Next Door. Kyran recently wrote about her owl collection and asked if any of her readers had collections as well. I left a comment sharing a brief bit about how my aunt was responsible for the start of my owl collection and how her book had influenced my choice of collectables when she’d asked me around age eleven if I had a favorite animal I might like to collect.

Everything I said was true except my memory of the book cover which is ironic when you consider that it’s been sitting on a bookshelf in every place I’ve lived over the last 40 years  except for those that occurred during my transient time in the military. 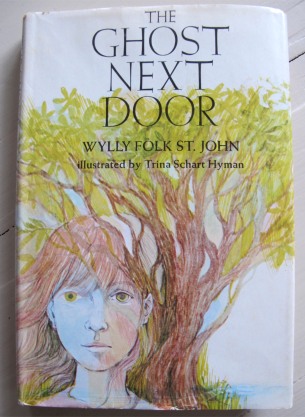 In my comment I said there was an owl on the cover with love in its eyes, but as it turns out the book cover I was recalling was not mine above, but the one below, a reprint from much later and one I’ve only seen online.

See what I mean … there’s the ghost child Miranda holding the owl with love in its eyes.

Kyran left a followup comment to mine asking where she might see the book cover and it was then I remembered that my first edition copy had the owl on the title page and not the cover.

You’re probably thinking ‘ so what ‘ unless you write or read memoir and know how important it is that your memories are accurate. Kyran will know exactly what I’m talking about as her book, Planting Dandelions is a memoir and is as she says ‘ … about becoming a family, while still belonging to myself. ‘

I write a lot about family and sometimes I can check in with them to see if our memories match knowing that while some of our experiences may mirror each other, how they affect us and what we remember, may vary a great deal.

Writing memoir is tricky. There are some things you can never forget as much as you might wish you could, while other memories shift just as my cover story did leaving me with an uneasy feeling about future stories. You can bet I’ll be tighter on fact checking in the future.

My brother-in-law, Leon is a writer, editor, and blogger and he has a cute disclaimer at the top of his blog that reads: ” Warning: The following contains opinions and ideas. Some memories may be accurate. ” I loved the ‘ may be accurate ‘ when I read it thinking how clever his warning was, but after my little mixup I wonder now if perhaps he was being more serious than cute.

There are things about The Ghost Next Door and my aunt that never get confused and I’ve written about her impact on my life and inadvertently my daughter Miranda’s in other posts on my blog. You can find them if you use the search space. (I’ve left you a clue below)

Aunt Wylly’s books were always mysteries filled with the kind of delicious clues a curious girl needs growing up, particularly when her home life is such that she needs a more pleasant distraction. Her books made me think and it does not surprise me that the still unfinished novel I began during NaNoWriMo has evolved into a mystery with a fantasy twist. As much as memoir appeals to me, I do like the freedom of making things up as I go when sorting out the plot lines in my novel. 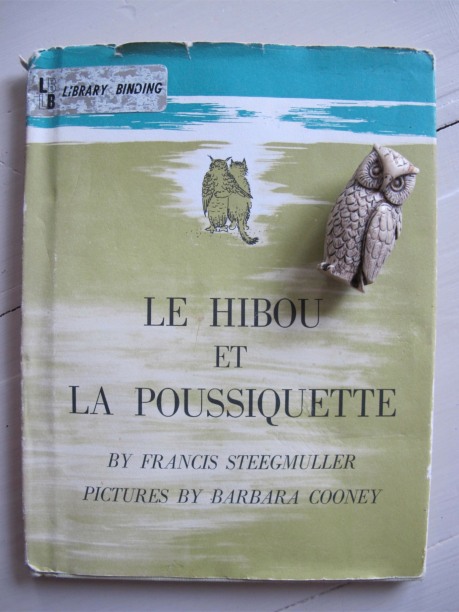 I’ll leave you with the image above of two owl gifts that my aunt gave me when I was a girl. Both sit on a bookshelf in the studio space where I do most of my writing. The book is written in French, a language I never learned, and I’ve had it since it arrived in a birthday package on my 14th birthday.

I kept it all these years because it was a gift from Aunt Wylly never knowing that 34 years later I would marry a man in another country who would speak French and be able to read it aloud to me.

There are loads of memories that connect me to my aunt, some of which I may remember differently from time to time, but all tender and all connected to love.

This photo was taken at my aunt’s home in Social Circle about the time I made my owl preference known. I couldn’t know then how much influence she would have on my life or how she would affect my writing years later.

Looking at her smiling in these last two images, I can’t help but notice there’s a bit of an owlish look to her and I’m surprised I never saw it before.

Wylly and Walton were brother and sister, they were also my great-aunt and my maternal grandfather. Wylly, christened William Michael, was two years older than her brother Walton. Linked by more than blood they shared a love of books and the written word. Wylly grew up to be a writer and journalist and Walton owned a book business, selling rare books and civil war reprints.

I have copies of the books my aunt wrote and the gifts she gave me over the years, but I have nothing except a few photographs of my grandfather who died when I was two. That changed the other day when my cousin, McKenzie surprised me by sending a set of bookends my grandfather, Walton made for his sister, Wylly.

They arrived in a small box that had a familiar smell even before I had it opened.

You may remember this post where I wrote about gifts from Aunt Wylly over the years and how much my sister Margaret and I loved the smell when we would open our presents at birthdays and Christmas. Seeing the package of mothballs and thinking about why McKenzie had gone to the trouble to put some into my package made me smile. 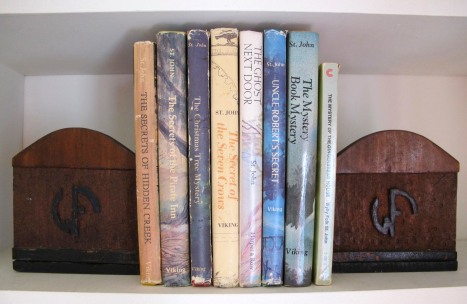 Here are the bookends my grandfather made for his sister, Wylly Folk St. John. It feels right that they should be tucked in tight around the books she wrote. I’m not sure how old he was when he built them for her, but I have a feeling it may have been a task for one of his boy scout merit badges. I’ve placed them in a slightly different way than they were intended, but I can see them more clearly from where I sit and write.

I moved this particular book to the side so you could see a bookend next to one of my favorite books my aunt wrote called, ‘The Ghost Next Door.’ It’s the book I took my daughter Miranda’s name from to honor my aunt. Her parents named her William Michael even though she surprised them when she was born by being a girl. Everyone called her Willie growing up which she later changed to Wylly and I never heard her complain about her unusual name. She was like a dear grandmother to me, but I couldn’t bring myself to give my daughter a boy’s name and Miranda seemed like both a perfect fit for baby girl and a sweet way to honor my connection to my great-aunt.

I like how the initials ‘WF’ could be Walton or Willie ‘Wylly’ Folk. The style of the initials makes me think of the Art deco period in the 1920s. My grandfather was born in 1910 and would have been in his teen years as the style was becoming popular. I don’t remember ever hearing stories about him being handy with tools or doing any woodcarving as an adult so I think I may be right in assuming these were made by a young Walton.

The University of Georgia has all of my aunt’s letters, manuscripts, and personal correspondence in its rare books and special collections library and I’m hoping a bit of research the next time I’m home will give me more details about the history of the bookends.

Lacking the real story, the writer in me has already created several versions of when and how my grandfather made them which will have to do until I can discover more. I feel sure both my aunt and grandfather would be pleased to know how valued and well-loved they still are and I’m terribly grateful to my cousin McKenzie for giving them to me. They’ve had a special place on her bookshelf for many years and it’s a sweet gift of family connection that she has shared with me by passing them on.