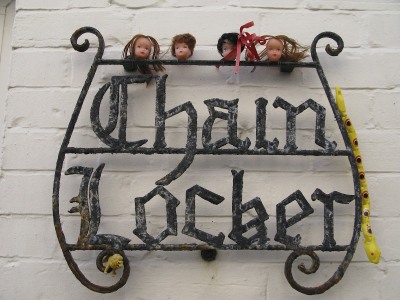 Sister Teresa had a gruesome collection of toy doll heads that she had collected from students this year. In the beginning she had not realized there was a problem developing until two of her students had gotten into a fight over a missing head. The doll’s head was later located in the accused child’s book bag tucked into a pair of rolled up socks.

In order to stop the fighting, she settled the dispute by taking possession of the head. Taking it out of the hand of the boy who was shouting the loudest, she walked over to the bulletin board and stepped up onto the small step ladder. At 4’10” she frequently ran into trouble when trying to reach the top of the chalk board or upper levels of the storage cabinets where other teachers liked to hide the confiscated collection of items that children should have left at home.

She reached up into the corner of the bulletin board, where she had several long stickpins, and moved one over to the top center, pushed the pin in and stuck the toy doll head firmly down over the big metal pin head. The head stuck out at a slight downward tilt so that from where the students sat in the classroom, it looked as if it were a head on a stake. It didn’t help that it was directly above the written book reports they had turned in last week.

Evan Anderson had written his report on the French Revolution mostly because he wanted to build a guillotine in his grandfather’s workshop for his class presentation. Because of the no-tolerance policy with having knives at school, he was forced to modify it a bit making the blade from cardboard,which he painted silver with some of his mother’s eye shadow. Evan had stolen one of his cousin’s dolls to to use as a victim and he’d taken the one wearing a big pouffy dress so the doll would look more like the pictures in the book he’d read. He’d even dipped her blond hair into flour so she’d look more like Marie Antoinette and less like Malibu Barbie in a party dress. Evan watched as Sister T stuck the head on the pin and positioned it right over the picture of the guillotine he’d drawn on the cover of his book report. He snickered quietly, thinking that it really was true what Riley Watkins said about Sister T being too spacey to see what was right in front of her.

All last week since the first fake beheading, heads had been rolling up and down the aisles between the desks. Evan and Riley, along with Scott and Justin, had been practically bouncing them off each other and still she had not caught them.

Even though his school report had been the reason for bringing the doll that day, it was Sister T who had inspired the game of rolling the heads and as of yesterday, the formation of the Rolling Heads Gang of Four, the name they christened themselves with over peanut butter sandwiches and juice boxes in the cafeteria. Of course his little brother Eddie, started moaning about why couldn’t he be a member too, but Evan had shut him up; ” You gotta be a 5th grader, ” saying them over and over in what soon sounded like a chant. Eddie had started to cry and said he was going to tell their mother about it when she got home, but Evan figured he would forget all about it by then.

His mom had been working so many late shifts down at the Handy Pantry it seemed like she was never home until just before bedtime. He wished sometimes that she could be there waiting for them after school like Riley’s mom.  When they’d moved here from Michigan to be closer to his grandparents after his dad died, he thought they would do more things together, but with his grandparents getting older it seemed like whenever she asked for a little help watching the boys there was always some reason why they couldn’t do it. He was getting kind of tired of hearing the same old response;  ” Roberta,” they’d say, ” we really love those boys, but we’ve already raised our kids and we’ve got things to do.”

He felt sorry for his mom when he wasn’t busy feeling sorry for himself. Whenever he began to feel too sad, he’d get angry instead and it wasn’t too long before he’d developed a reputation at the private school where he spent his days. Sacred Heart was considered the best school in Hattiesburg and it didn’t seem to matter that they weren’t Catholic as long as the tuition checks kept coming. That was one thing his grandparents did insist on doing. It was tradition in the Anderson family that children living in Hattiesburg had to go to Sacred Heart. Their dad had gone there for all of his 12 years of education before joining the Army and running off to see the world. Evan was beginning to see why the Army had seemed so appealing. Hattiesburg was pretty small and he missed the friends he’d left up north.

He would rather have gone to the elementary school that was walking distance if you cut through the woods from the red brick apartment complex where they lived. He halfway thought that if he made enough trouble, the school might kick him out and he could go to public school with some of the friends he’d made closer to home.

Sister T had a thing she always said whenever the class got too rowdy or wouldn’t stop talking. Sometimes she’d add things to it like, “If you all don’t get in your seats, or If I have to repeat myself one more time,” but the ending never changed and after a while the class would mouth the words silently as she said them, ” Heads are going to roll!”

After the first head went up as an example, Evan lost what was left of his self- control. Whenever he heard her beginning the heads are going to roll threat, he’d signal the other members of the Gang of Four and the head rolling would begin. As much as Sister Teresa tried to maintain classroom discipline without being heavy handed, she knew no one was taking her seriously. Still, she kept collecting the heads as they rolled down the aisle and putting them on stick pins in neat rows across the bulletin board.

She didn’t think much about her collection of heads as they multiplied until one day when she turned to face the board she suddenly thought, there was something so gruesome, so perverse looking about those dismembered heads that she was going to have to find a new expression to use when dealing with those disrupting her class. She had not let her students see it yet, but sometimes she caught herself choking back a little giggle whenever  ” Heads are going to roll ” slipped out.  She’d need to give it some thought to come up with just the right thing, but she’d had enough of the “head games” these kids were playing. It was time to end the revolution.

Thanks to David Engel for the topic suggestion that I used for this week’s TMAST and also Gaelikaa who helped me finish the story with her sentence. I’ve highlighted in their sentences in bold so you can see what the inspiration was for this weeks story.

Gaelikaa has a story of her own this week so head over here to take a look. I also want to thank Karen for her topic sentences.

Judy Harper joined me again in writing a story for TMAST. Her story can be found on her blog here.

Please take a look at the pictures for next week’s TMAST and offer up suggestions for topic sentences based on the photographs. Thanks for reading and commenting and please consider writing along with me next week.

Additionally, I want to thank each of you who leave a comment especially on TMAST days. These little stories are fun to write and are the seeds I hope for the bigger stories and real work I imagine for my writing future.

6 thoughts on “Tell Me A Story Tuesdays – The Revolution”