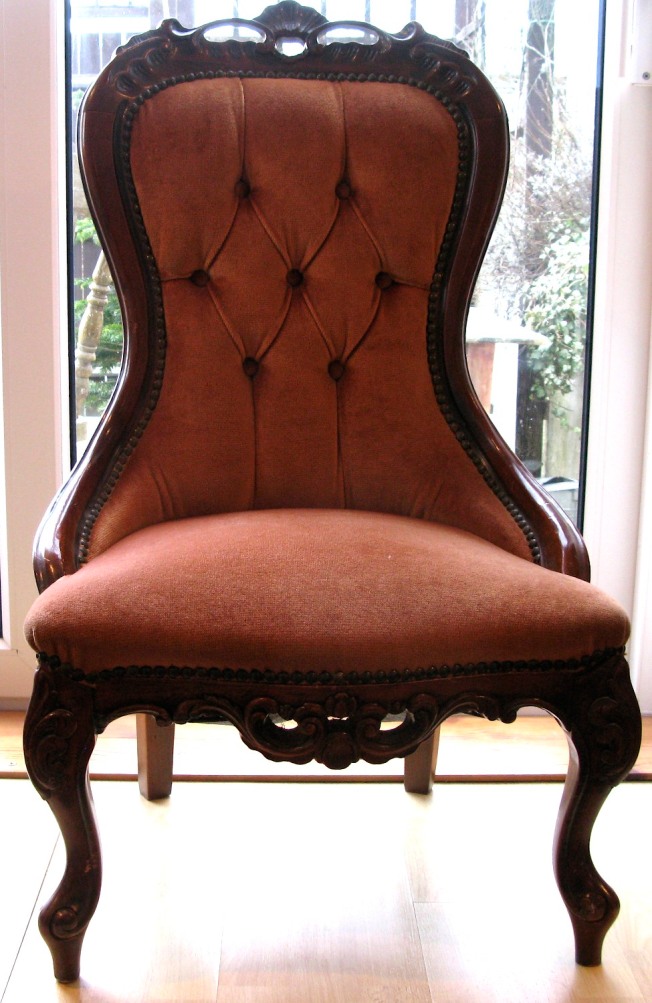 This chair belonged to John’s parents. He inherited it after they died and has had it for about 13 of its 25 years. The chair does not really go with the living room as it exists now and John would tell you that he has never been in love with it. In fact, we tried to give it away to his niece Liz and her partner Tom when they decided to move in together, but they politely declined citing lack of space. They are in their mid twenties and I think perhaps having something that looked like a ” grandma chair ” was not what they had in mind for their first place together. Since John didn’t mind the idea of giving it away, he was also okay with me using it in my new space.

Feeling that my new studio needed more than just the daybed or desk chair for sitting, I decided to update the chair and make it a bit more funky. It had a faded polyester velveteen fabric that was a rusty, orangey-red color and several people pointed out that it fit the color scheme for my space. I felt like it needed reupholstering so I set out to make it happen. As is my way, I believed it was possible to do it myself.

It sat in the living room for a while with my fabric choice, a lime colored shade of green draped over it, and later in my developing space as it was being finished. When friends and family stopped by to have a look at our renovation/extension progress, they would see the chair and I always mentioned that I was planning to reupholster it for my studio.

I cannot tell you how many people said, ” Oh, you know how to reupholster furniture …” or something similar. Well, I did not know how to do it having never done it before, but like many things, I never assumed for one minute that it was beyond my ability. My response to those who asked was usually, ” No I haven’t, but I can work it out.”

I did consider that being a tufted chair would make it a bit more difficult, but the hardest part was taking the old tacks and staples out. After John watched me digging and yanking staples for several nights in a row, he encouraged me to give it away thinking it was too much bother. Suggesting that I quit in the middle of a difficult project only motivates me more. It’s like one child saying, ” Go on, I dare you …” to another child.

He walked into my studio space last night to find me hard at work on my chair and after seeing the tufting, said with some surprise how good he thought it was looking. My goal in sharing this story is two fold, one is my excitement in working it out for myself and the other is to encourage others to take a chance on trying new things even if you don’t know how it’s done. I think believing you can do it will often carry you along while sorting out the details of how to do it.

My ” new ” chair is almost complete and I will be back in a few days with some photographs that show the steps I went through as well as the finished product.

I would love for you to share an example of something you did that people questioned was possible or perhaps a project you have been considering.

11 thoughts on “Believing Can Make It So”