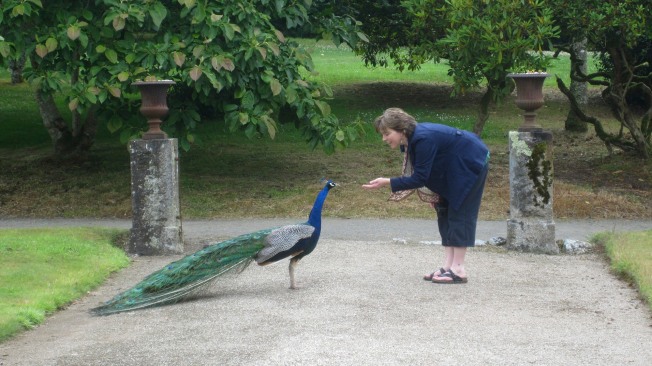 Okay, so I know this peacock doesn’t really qualify as an animal and I should be embarrassed to post a photo of me looking seriously in need of a fashion makeover, but this image taken by John on July 4th is so typically me that I decided to toss my vanity out the window and share it.

In addition to showing you some less than flattering pictures in this post, I’ve decided to let you in on something you may not know about me yet. It’s nothing too shocking and some of you probably do it too … at least with your pets at home. I like to talk with animals and that includes just about anything that creeps, crawls, walks on four legs, or flies.

Living as we do with so much nature and wildlife around, I find it easy to see how Beatrix Potter created the circle of animal friends that she did and the magical way she gave them human characteristics and voices of their own through her children’s books.

I’m not sure what John thinks when he hears me call out to wooly sheep like these, but sometimes he likes to answer for them when he hears me say,” Morning, girls. ” If he happens to be nearby, I’m likely to hear him respond in his very best high-pitched girly sheep voice, ” Morning, Elizabeth.”

Today while John and I were cycling up on the moor we had a chance encounter with some of the wild ponies that roam free. As you can see below, not all the ponies were feeling wild and standoffish. The little one below was quite comfortable with me letting me give it a little hug before getting back on my bike to ride. 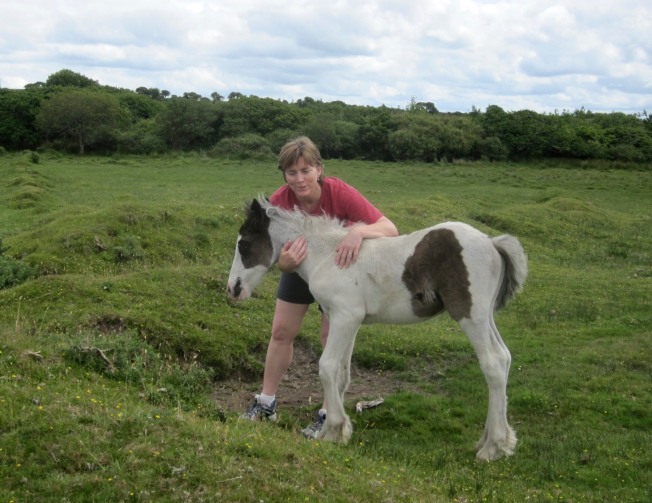 This pony was so tame that it was content to stay close when John rode up on his bike a few minutes later.

We stopped by a neighbor’s house on our ride and I had a chance to hold a ferret for the first time. If you’re interested in owning one yourself they have more babies that can be had for ten pounds each.

The photos below are some John took a few months ago when the Gorse was in full bloom. I was trying to get a new pony to let me take a few photographs when the moorland horse below decided she’d be happy to give me some of the attention I was trying to coax from the pony. I didn’t know she was behind me until she gave me a little nudge.

Once she bumped me, I turned and saw John documenting my surprise. 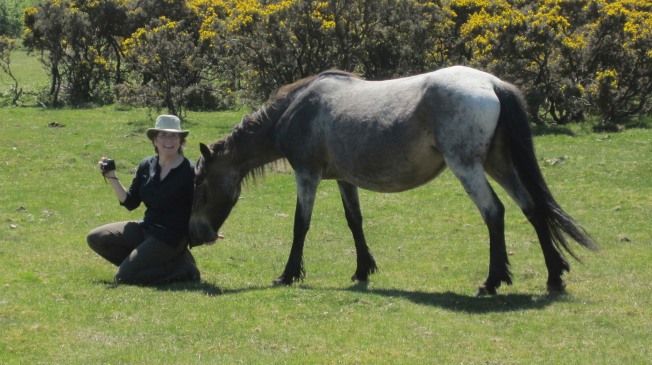 She got a bit aggressive and no amount of talking as in, ” Hold on a minute while I get to my feet, ” mattered enough to keep her from gently knocking me about. I won’t mislead you into thinking that she suddenly found me so irresistible that she couldn’t leave me alone … it was the carrots I had with me that made so popular with her.

13 thoughts on “If I Could Talk With The Animals”