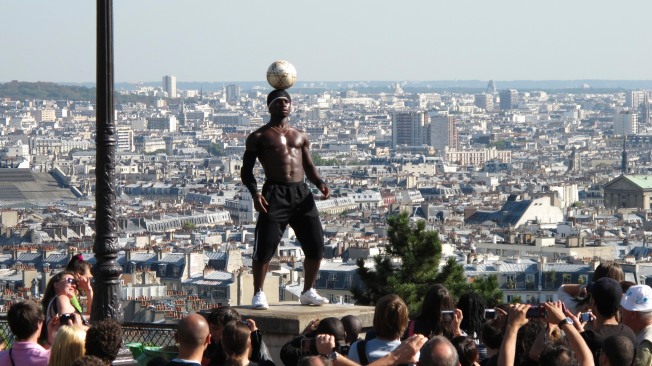 As illustrated by my last post, while I was in Paris I was never quite sure what I might see around the next corner. One might think this location a bit odd for this show of skill … balancing a ball on various parts of the body in front of a Paris skyline especially since it occurred in front of the famous house of worship below.

Unlike other well-known churches and cathedrals, there was no photography allowed and once inside it felt more like a place of worship than the tourist sites that so many others churches have become.

Since this man had chosen to locate his ” workplace ” at the base of the steps leading up to the famous church it seemed somehow appropriate that he send what looked like a prayerful message to his higher power.

I noticed the man with the ball for a minute until I was temporarily distracted by the traveling troubadour above. Even the music man stopped to watch the ascent when he realized he had lost the attention of the crowd who found a man climbing a lamppost more interesting than his version of James Taylor’s ” You’ve got a Friend.”

… climbing hand over hand with a soccer ball resting lightly on his head. 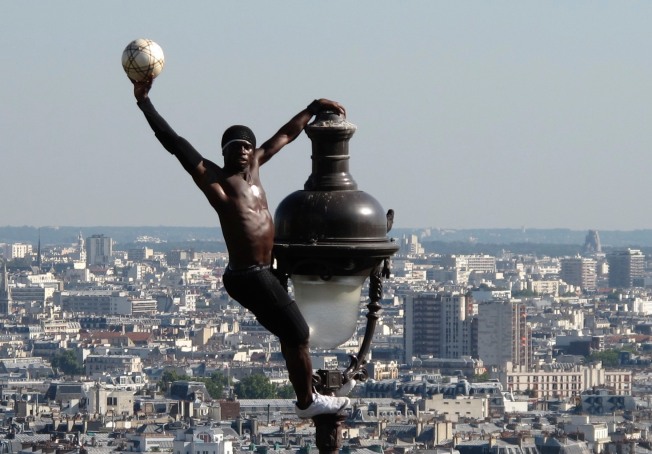 He reached the top rather quickly and the gathered audience that watched from below him as well as the larger once scattered across the steps to the Sacré Coeur were impressed and amazed as their clapping and shouts illustrated.

Just as they say in business … what goes up must come down, he could not maintain his high position forever and he began his descent back to earth. He dangled by one arm balancing the ball on his foot instead of his head and teased his audience with a few impressive displays of his ability to keep their attention.

At one point he dropped his ball, but someone below gave it a toss back up and no one seemed to lose interest even with the temporary loss. 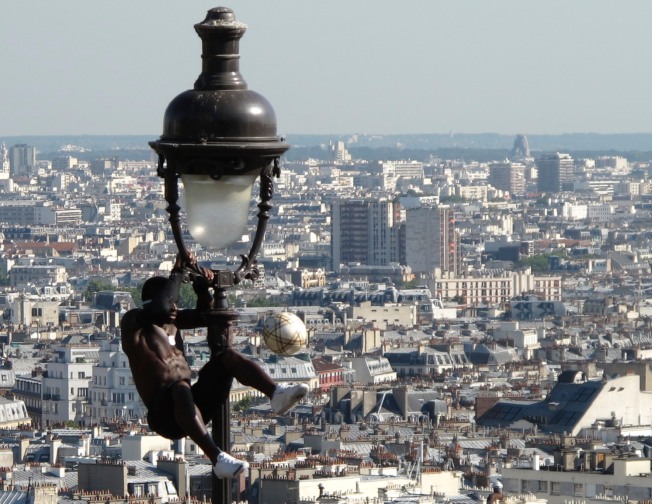 Once he had his ball back, he did a series of flips and had the ball bouncing up and around from one foot to the other, a trick that one might be more accustomed to seeing demonstrated on a soccer field.

Then he let the ball go to the ground and quickly followed behind dropping his body faster than one might imagine safe for a descent.

Back on the ground he stood for a few minutes atop his impromptu stage, a concrete base where his muscled physique reminded me of the marble bodies standing watch in the Louvre. With his hat at his feet before him, he waited as his audience showed their approval with the clink of their coins and I wondered as I watched how much money he would take in for his labor. 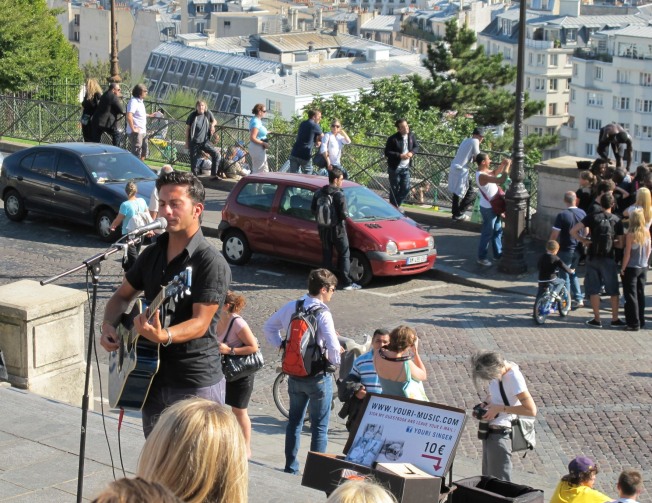 Before I could think too much about his possible yearly income, my attention was diverted back to poor Yuri who had begun his song again hoping to sell a few CD’s before it was time for the climbing man’s next show. So surprised was I still by the carnivalesque atmosphere of the area that when I saw the woman below approaching …

I wondered if she was perhaps another person intent on making a living close to the church grounds and as she stopped to be photographed with tourists standing with the Sacré Coeur behind them, I wondered briefly if she was merely in costume to make money or a real nun.

She paused on the steps and gave Yuri a look that made me wonder if she meant to compete with him for an audience too and for a second I half expected her to break into a song and dance routine straight from Whoopi Goldberg’s London stage production of Sister Act.

I watched as she climbed the steps graciously posing for a few more photographs until she was joined by two more members of the church and they went inside. By the time I was ready to leave a few hours later, both Yuri the musician and the climbing man were gone and several new performers had taken their place.

I ran into the older nun you see above only a few days later which was interesting on its own, but where I saw her and what she did make the story even better. That’s one for another day though as I have my own work to get on with. Having no cap to place at my feet, I need to send out more submissions as I look for opportunities today to make my own way to the top.

5 thoughts on “Successful Moves – Climbing Your Way To The Top”