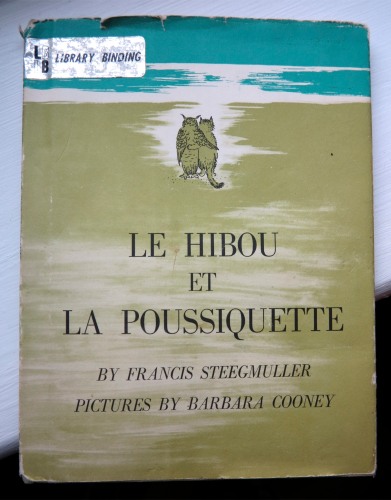 Written by Edward Lear and translated by Francis Steegmuller

In 1975 my great-aunt, Wylly Folk St John sent me this book in a birthday gift box for my fifteenth birthday. She always sent the best presents, and packages from her were special even when I was uncertain as to why she gave me certain things.

I collected owls or owl themed items when I was growing up and since I did not speak French, this may have been what led her to choose The Owl and the Pussycat translated into French as a gift for me, or perhaps she imagined I might consider taking French in high school. Having a terrible facility for foreign language, I went with Spanish which was said to be easier than French and saved this book  for sentimental reasons even though I could not read it.

When I moved to Cornwall I had loads of books that had to find a new home. This one made the cut because Aunt Wylly had given it to me and it found a home on a bookshelf that my husband John built for me after we married. I displayed it in a way that made the cover visible and it sat there looking pretty next to a little owl that had been a gift from her as well.

A few weeks ago, just before our fifth wedding anniversary, I looked up from my desk and saw it on the shelf and it occurred to me that while I still did not speak enough French to read it, my British born husband did.

John seemed a bit surprised when I brought it in as we were getting ready for bed and asked him to read it to me. I think his exact response was,  “Now ?”

Even though the poem was not new to me it sounded pretty sweet to hear him read it in French, 39 years after opening it on my birthday.

I know most would argue that it was just a bit of coincidence, but I can’t help but wonder what my aunt would think about our love story and how the romantic in me never gave up on finding lasting love. 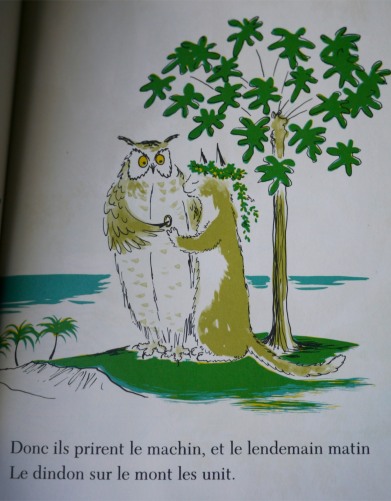 Today is the sixth anniversary of our meeting face to face having met almost “by accident” online six weeks earlier. I flew to Cornwall in 2008 on Valentine’s Day and when my visit was over two weeks later, we both knew our future was set.

Despite an 18 year age difference that created loads of initial objections from my family and friends, I think we both would agree that the ocean between us, a five-hour time difference, and the limitations imposed on the amount of time immigration would allow me to stay were some of the bigger issues in our early relationship.

Being wooed from across the sea was full of surprises and I can still remember when John quoted these lyrics not long after I had returned to the US from my two-week long Valentine’s Day visit.

How could I not fall madly and deeply in love with a man who said such reassuringly sweet words.

At 17 he falls in love quite madly
with eyes of azure blue,
At 24 he gets it rather badly
with eyes of a different hue.
At 36 you’ll find him flirting sadly
with two or three or more;
When he fancies he is past love,
It is then he meets his last love,
And he loves her as he’s never loved before.

I have told our story in different places on my blog, but I will include a few links for those who might be here for the first time. The highlighted words above will take you to other earlier posts if you wish to know more.

The Gift You Keep

Will You Stay With Me Will You Be My Love

Buttercup Madness and Mid – May Diversions

6 thoughts on “A Romantic Story For Valentine’s Day”