If I said I had been kidnapped by a monster to explain my lack of posting here over the last two weeks, it would not be far off from the truth. I took this photo at Eden Project over four years ago when I was in the process of relocating my life to Cornwall from the US. The monster in the background is made up of old electronic equipment, broken bits of televisions, washing machines, out-dated computers and other kinds of gadgets that can improve our lives or sometimes imprison us.

Held Hostage By My Indecision

Computer changes are at the top of the long list of distractions that have kept me from writing lately.  I’ve been getting updates from Apple for months letting me know that I needed to move to iCloud as Mobile Me was ending. Don’t worry if none of the details make sense to you, just know that over the last year I’ve known this was coming and put it off making a decision until now.

One of my chief concerns with not moving to iCloud had to do my email and I was only able to decide once I discovered I could leave it as it was and let some other significant parts of my online/connected life go. Even then, I waited until the last four days possible to do so and only after reading loads of confusing information. See what I mean about monsters and indecision.

My first blog was through iWeb, which was a big part of the problem because it was affected by the discontinuation of Mobile Me and the required move to iCloud.  That blog became an archive for my earliest posts after I moved to WordPress in early 2009, a move necessitated by my lack of ability to moderate comments that were being left by a female stalker who did a variety of things to try to make my life miserable.

The early version of GOTJ no longer exists now. What you will see if you look for giftsofthejourney.com is this post as I mapped the domain name to my WordPress account knowing my iWeb version of the first GOTJ would disappear at the end of June.

I saved a copy of the first 80 or so posts and plan to move them over to this blog one post at a time, backdating them so they show up in the time period in which they were originally created. Even though it will take some work to republish them along with their comments, I think it will be worth the effort to have all of my posts since June 2008 finally in one place.

I’ve been wanting to use my domain name here without the addition of wordpress.com and hopefully this change to giftsofthejourney.com won’t create any problems for those of you who have subscribed to my blog. We’ll know after this post.

Welcome to my new blog home.

I’m still doing a bit of decorating so please bear with me as I work out the kinks.

What do you think of what I’ve done with the dining room so far?

Or how about this living room (Grand Salon)….I wonder how much help it takes to keep this clean.

Look at this….someone has left a bunch of old clothes in the parlor…hmmm,  nothing here that would fit me.

I guess you’ve got a pretty good idea by now of where we spent our honeymoon…need another hint? 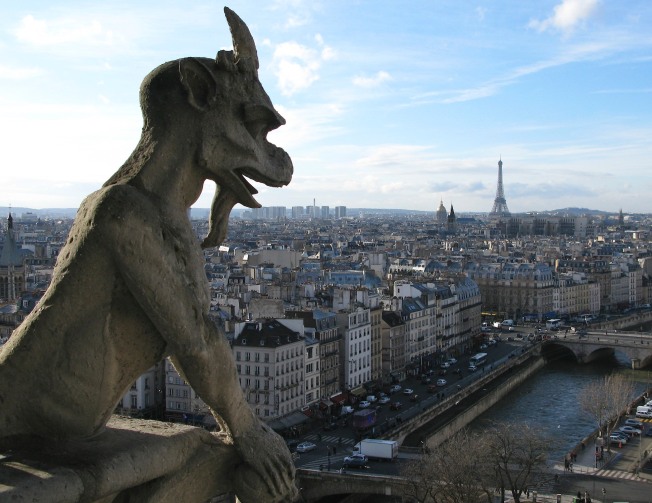 Paris from the Towers of Notre-Dame Cathedral

I’ll be back in a bit with some stories to share…once I figure out how to make the color in my photographs appear less muddy.  I miss iWeb…

I need to say that since becoming a Mac convert a few years ago, I have been fairly zealous in my affection for all things Mac. Once I switched from a PC to a Mac, Apple suddenly had new meaning … shifting away from red and delicious, to frequent exclamations of delight as in, “ Have you seen what this new iPhone can do?”

Despite periodic glitches, such as the issues currently taxing the systems in Mac land, I still love Apple products. That said, with the new 3G iPhone launch and the migration of my .mac account to the new mobile me system, a few problems have developed which leave me less than enthusiastic about the changes.

You may have noticed an inability of late to leave a comment for my posts. Let me assure you this is not something I have initiated from my end, but rather is a result of the changes in Apple land.

Comments are always welcomed by me and help me feel connected to my friends and family back in the states. Hopefully, the comment section will be back on-line soon but until then, please continue to stop by and see what’s happening on this side of the ocean.

Email is still working if you’d like to send me a message although it seems to only be present on the main blog page.

Ah well … you can’t hit a home run every time.