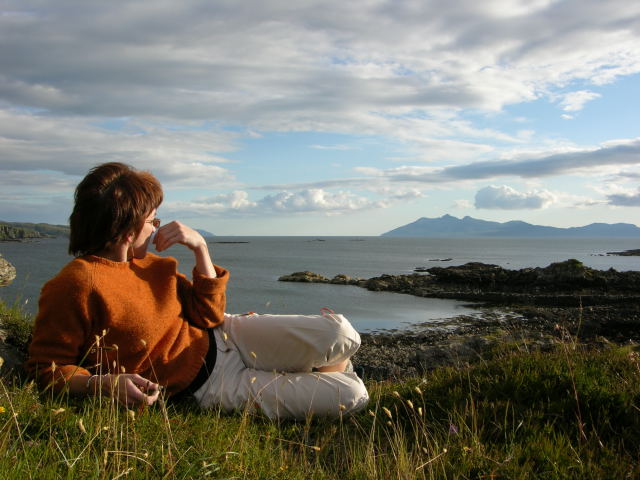 Elizabeth Back In Her Spinning Days (Note My Smaller Size)

When my husband John wants to say someone is a champion at whatever activity they are engaged in, he uses the expression “ ________ for England!”  You can fill in the blank with what ever works for you. The other day we were discussing his childhood and he said his younger brother could sleep for England when he was a kid and I thought of that this morning after my spin class.

Spin class! I know you’re probably thinking, what is Elizabeth talking about and where is she? I’m still in Atlanta with what looks like a summer here before me and while I’m doing more than just trying to diminish the extra girth gained during my halcyon days of sausage, chips and egg meals in Cornwall, getting fit has also become a priority.

While I wouldn’t exactly admit to eating for England, I have put some real effort into sampling a variety of food combinations I would have likely avoided while living in the US. Before moving to Cornwall, I generally counted fat grams like a deep-sea diver would the remaining air in her tanks, but I will admit that sometimes I strayed from the path on my own so I can’t blame it all on my move to the UK.

I found my inner baker in Cornwall as some of the folks in my village could tell you and I discovered that sharing whatever I was whipping up in the kitchen with my neighbors was better alternative than freezing it for later. Anyone with a decent sized sweet tooth can tell you that frozen cookies taste almost as good going down as those eaten hot out of oven. You just have to exercise a bit of caution so you don’t chip a tooth as you sneak a cold one on your way past the freezer.

Poor John has more than a time or two gone in search of a little home-baked goody he saw go into the deep freeze only to discover after a through search of the contents, that some cookie monster had been there before him.

Going back what I said earlier about spinning … to maintain my sanity while I am sweltering through endless days of temperatures in the high 90s, I’ve joined a local gym so I can spin on their bikes in classes designed to work the weight right off your backside and other tubby places.

So far, it’s been great!  The instructor said this morning that I was doing really well and that my body seemed to have good muscle memory. I know she meant that I had picked it back up as if I’d not been away from it for so long, but it’s actually been about seven years since I was on a spin bike with any real consistency.

Thank goodness my muscles can remember what a good workout feels like because I think I had pretty much forgotten. That said, I am loving the classes and as John might say, “ I’m spinning for England! “

And just in case you’re wondering … I’m down seven pounds so far and my cycle shoes haven’t even arrived from Cornwall yet.